Car-sharing usage up in Germany

German car-sharing companies logged sharp growth in 2018, picking up an extra 350,000 registered customers. The sector has been slow to establish itself in Germany, but 20,200 car-sharing vehicles are now on the roads. 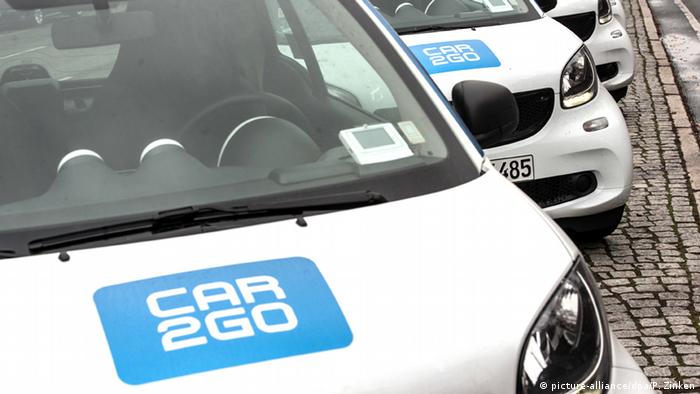 The number of people using car-sharing services in Germany increased in 2018, with 2.46 million registered users — about 350,000 more than the year before — national car-sharing lobby Bundesverband Carsharing said on Wednesday.

"More and more people want to play their own part in the transportation revolution," said managing director Gunnar Nehrke as his organization released annual figures for the sector. "After a period of stagnation, the market has grown markedly again."

Bundesverband Carsharing's 2018 data said that a total of 20,200 car-sharing vehicles were now on Germany's roads, a year-on-year increase of 12 percent.

The most popular type of service in Germany remained so-called "free-floating" car-sharing programs, when a car is parked where the last customer left it and it can then be located by mobile phone by the next user who wishes to use it. Usage of these services rose 14.9 percent on the year.

But the group particularly welcomed a 21.5 percent bump in the "station-based" sector, where cars are picked up and dropped off at one of a number of designated locations.

The group's 2018 statistics showed that station-based providers recorded growth of 21.5 percent, while free-floating car-sharing customer growth increased 14.9 percent. They argued that these services in particular allowed people living in larger towns and cities to go without a car of their own altogether.

"With station-based car-sharing, 70 to 80 percent of customers already have no car of their own," Nehrke said. "Cities and municipalities should promote this variation in particular via the widespread establishment of car-sharing stations in public places."

Car-sharing supporters hope that it will significantly reduce the burden on the environment and traffic, although the numbers showed a very low proportion of electric vehicles at German car-sharing companies.

"The suppliers want to switch to emission-free drivetrains," said Nehrke, but argued that electric vehicles were still too expensive.

Range and recharging issues are also particularly problematic for people who may not have the means or know-how to recharge the car looking to rent for a short period of time to travel a long distance.

Ferdinand Dudenhöffer, an automotive industry expert at the University of Duisburg-Essen, said that although 20,200 vehicles are offered for use by car-sharing companies, these only make up 0.04 percent of the total number of passenger cars in Germany and thus had a limited environmental impact.

"There's still an awful lot of room for improvement," Dudenhöffer said of the 2018 figures. "Car-sharing's a good idea, but the numbers show that there's still a very long way to go and that its current impact is barely noticeable."

He said that changes in the environmental friendliness of the fleets of traditional rental car companies like Sixt and Europcar would have a greater impact on the environment.

Not all registered users active

Nehrke also said the car-sharing industry had to be careful not to negatively affect public transport in Germany.

"We know from the USA that Uber and other ride-sharing services have damaged the existing public transport system to such an extent that it is no longer economically viable in some places," he said.

Creating opportunities for a young entrepreneur

In the big cities, the availability of high-speed Internet provides opportunities to develop new businesses. One young entrepreneur used it to jumpstart an electric car sharing service. (20.02.2019)