German Foreign Minister Wolfgang Schäuble has said Europe should appoint a directly elected leader at the head of the European Commission, suggesting existing European Parliament elections could be the deciding factor. 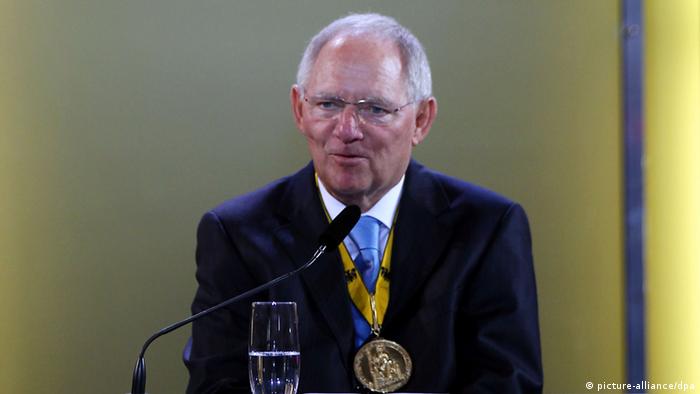 Wolfgang Schäuble has suggested that the European Union should appoint a directly elected president, saying such a move would give the bloc added credibility.

"Europe's political unity must have a face and that face must represent a legitimate power," Schäuble said Thursday at an award ceremony where he received the International Charlemagne Prize for services to Europe.

"We must now create a political union in Europe," the German finance minister said. Schäuble also called for European institutions to be strengthened to help unite the bloc, though he cautioned that such changes would have to be gradual.

"Compared to a revolution, evolution has many advantages, not least that it happens voluntarily and peacefully," the 69-year-old said.

Christian Democrat veteran Schäuble said that one possible solution would be for the leader of the bloc that won the most seats in elections for the European Parliament, which would currently be the center-right bloc, should also take up the European Commission's presidential role.

Schäuble's comments came as part of a speech upon receiving a major international statesmanship award in the western German city of Aachen, near the border with the Netherlands. The Charlemagne Prize is presented annually to honor outstanding achievements towards European unity, with past prizewinners including Jean-Claude Trichet (2011), Pope John Paul II (2004), US President Bill Clinton (1999) and German Chancellor Angela Merkel (2008).

Luxembourg's Jean-Claude Juncker, the current chair of the group of 17 eurozone finance ministers, the eurogroup, lauded Schäuble as a European patriot.

"We need - as Wolfgang Schäuble also puts it - not more Europe, but less," Juncker said in the opening address at Aachen city hall. Schäuble is also tipped as Juncker's possible successor at the head of the eurogroup.

The prize is named after Charlemagne, or Charles the Great, who conquered much of western Europe and was named Roman emperor in 800 AD. The former Holy Roman emperor and king of the Franks is buried in Aachen.