In a landmark repatriation, Saxony is returning a record number of ancestral remains to Australia. But why are thousands of Indigenous remains still gathering dust in museums in Germany? 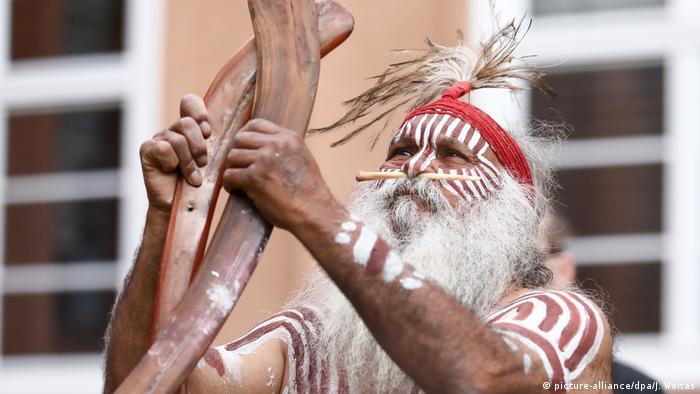 Bianca-Ann Baxter boarded a plane for the very first time on Tuesday. She traveled more than 16,000 kilometers (10,000 miles) and crossed three continents, as is standard for antipodeans venturing north of the equator. But this wasn't any ordinary trip.

The young Gunaikurnai woman made the long journey from Gippsland, Australia to Leipzig, Germany, to reclaim 35 Indigenous ancestral remains, stolen from her community more than a century ago.

"Everyone has a longing to be home, and it is no different for our ancestors," she said, commenting on the return of Gunaikurnai's 35 "old people," 31 of which have been identified and named through a five-year project involving forensic anthropology and community consultation. "There is comfort in knowing our ancestors will be returned to the country where they belong with their descendants."

The Gunaikurnai people's remains are among a total of 45 ancestors being repatriated from Germany's Saxony State Collection. The official ceremony, which took place at Leipzig's Grassi Museum on November 28, marked the second of three handovers taking place from 2019-20 in what the Australian government is calling a landmark return.

Six ancestors have been returned to the Menang people in Western Australia; and one to the Ngarrindjeri people in South Australia, plus a further three returning to Australia under the stewardship of the Commonwealth Government while further research is conducted.

Attained primarily through grave robberies, the 45 ancestral remains were sold to a British merchant in the late 19th century. In 1892, 1900 and 1903, they arrived at the Royal Zoological and Anthropological Ethnographic Museum, now known as the Dresden Museum of Ethnology.

Hair samples were added to the collection in 1880 as a gift from Baron Ferdinand von Müller, a German-Australian physician and geographer, who ordered them from a mission on Gunaikurnai country in Gippsland, located in the south-eastern part of Australia.

Today, there are an estimated 1,600 Australian Indigenous remains in museums, universities and collections around the world, taken by scientists and researchers in the late 19th and early 20th centuries in the name of "biological research."

It's a narrative that's all too familiar to Major Sumner (known as Uncle Moogy), an elder from the Ngarrindjeri community in South Australia, who has been working tirelessly in repatriation for more than 30 years.

"I think if I went and dug up all the grave sites in our community, I'd find empty boxes," Uncle Moogy told DW. "Because the coroner, Ramsay Smith, when an Aboriginal person died he sold them. He was sending them overseas." A exemplar ceremony: 1,600 Australian Indigenous remains are believed to be in museums worldwide

"How many in this room have makeup on?" says Uncle Moogy, cajoling the audience at the Grassi Museum, who raise a few tentative hands in reply. "Look at me, I've got paint on my face. I am a modified object? Are you a modified object?"

His playful analogy represents a much larger issue: the categorization of ancestral remains. Many museums class remains that have been "modified" (with decoration such as paint or shells) as inanimate objects, in turn disqualifying them from repatriation. Furthermore, many museums are still using numbers to categorize human remains, a practice that is seen as outdated and disrespectful by repatriation experts.

"We have to deal with a lot of museological hierarchies in the categorization of remains," explains Amanda Morley, assistant director of Indigenous repatriation at Australia's Department of Communications and the Arts. "There's still much work to be done in educating institutions so they don't just see remains as simply objects to be looked at and studied."

Another barrier to repatriation is Germany's "Law for the Protection of Culture," which seeks to prevent the export of cultural assets, while at the same token making it difficult for museums to fulfill their ethical obligations to original custodians.

With more than 5,000 Indigenous remains gathering dust in Dresden's Museum of Ethnology and Berlin's Humboldt Museum under fire for displaying cultural artifacts appropriated during Germany's genocidal forays in Africa, repatriation experts are calling for legal reform.

According to Dr. Birgit Scheps-Bretschneider, director of provenance research at the Grassi Museum, there is still a gap between repatriation and reparation that needs to be addressed at a political level.

"Politicians don't want to clearly state what happened in the past. But if there are crimes involved, then I think there is certainly an obligation to engage in reparative measures. Rather than just returning the remains, we should be developing grass-roots projects to improve healthcare and education." 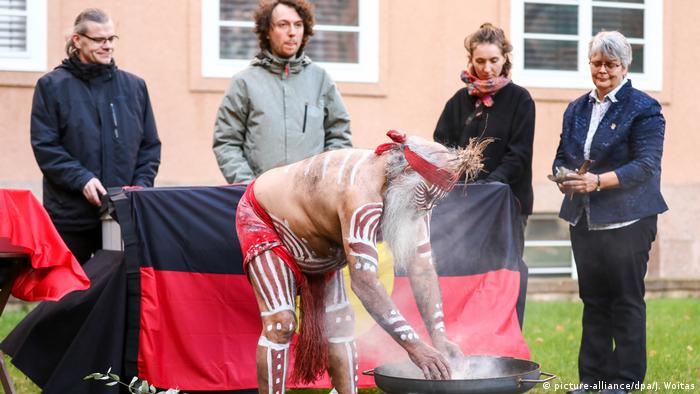 Uncle Moogy, an elder from the Ngarrindjeri community in South Australia, leading a smoking ceremony

Calls for self determination

Forty-five grey archive boxes, each containing an ancestor, are walked in single file into a large sitting room at the Grassi Museum. Each box is ornamented with gum and grass tree leaves, and as they are placed down on a long table— all 45 ancestors are draped safely beneath three large Aboriginal flags.

Each community member gets up to the podium to say their piece. Stewart Hansen of the Menang community in Western Australia is exuberant, "I'm sky-high to be here with all of you today," he says. Uncle Moogy is already dreaming of home, saying that he can't wait to go back to South Australia to see the red-glow over Kangaroo island — "that's the ancestors welcoming the spirits who have passed."

But Megan Krakouer, a Menang woman, is resolute: "Can I put my hand on my heart and say, 'I'm taking my ancestors back to rest peacefully?' I really struggle with that. When our ancestors were taken, this was an act of racism," says Krakouer, who is the program director of the National Suicide Prevention and Trauma Recovery Project. "They treated our people like animals. That trauma is still very much felt today— just look at the statistics for suicidality, poverty, sexual abuse and incarceration."

Que Kenny, a law student from Ntaria near Alice Springs, echoes Krakouer's statement: "We have a problem with systemic racism in our country and a government that is fundamentally broken. We need a system change. We need our elders and up-and-coming leaders to have a voice, to have the authority to represent our people."

Masks, jewelry and statues - how did items from the colonial era find their way to Germany? The director of the Linden ethnological museum in Stuttgart shares her insight in an interview with DW. (07.03.2017)

The human remains of a Yidinji king are going back to Australia 130 years after they came into German possession. Australia has described the handover, one of three set to take place in April, as a record return. (09.04.2019)