A co-leader of the AfD has admitted that some members who hold particularly extreme views have been persuaded to leave. This comes as the far-right party seeks to avoid monitoring by the domestic intelligence agency. 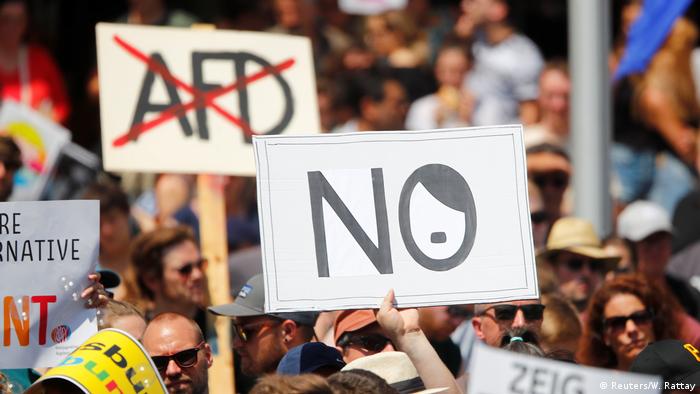 The co-leader of Germany's populist Alternative for Germany (AfD) party,  Jörg Meuthen, has said his party has persuaded some "problematic" members to leave in recent weeks, as calls mount to place the party under observation by the domestic intelligence agency.

Meuthen told a press conference in Berlin on Monday that "some members" had quit of their own volition.

"This was successful for us in the last few weeks," Meuthen said, adding that, when it was not possible to bring this about, official measures to expel unwanted members would have to be taken.

The AfD, which has opposition footholds in parliaments at both regional and national levels, would, however, not allow itself to be forced into launching a wave of expulsion proceedings, Meuthen said.

He asserted that breaches of Germany's postwar liberal democratic order were not a problem specific to the AfD, but could rather be found in the long-established mainstream German parties.

Calls for the domestic intelligence agency BfV to formally keep tabs on the AfD have mounted since September protests with neo-Nazi overtones in Chemnitz , in which the party took part.

In the past few days, an internal AfD report has surfaced calling on its members to avoid using certain highly politically charged phrases, such as "foreign infiltration" and "ethnicity inversion." The report has led to yet more calls from across the political spectrum for the party to be monitored, with lawmakers expressing concern that the AfD was trying to hide its true beliefs to avoid coming under official scrutiny.

According to AfD parliamentarian Roland Hartwig, the party recently drew up a list of "irreconcilable" organizations to which its members cannot belong, including Pro Chemnitz — the right-wing group behind the wave of protests in the eastern German city.

The AfD set up a working group in September to seek ways of avoiding the monitoring process.

Meuthen, who is a member of the working group, said Monday that the calls for observation of his party were a "purely politically motivated" procedure designed to remove competition.

Read more: The AfD is a challenge for the whole political system in Germany

Frauke Petry, the former co-leader of the far-right Alternative for Germany political party, is to stand trial charged with giving false evidence about campaign financing. If found guilty, she could face a year in jail. (23.10.2018)

In what some have described as a bellwether for German politics, millions of Bavarians are casting their votes in state elections. With the CSU expecting a poor performance, the poll could spell trouble for Merkel. (14.10.2018)