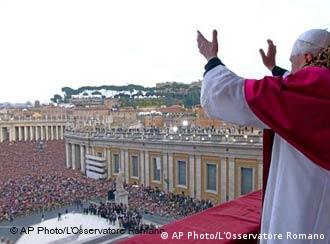 Cardinal Joseph Ratzinger, a respected theologian and one of John Paul II's most trusted advisors, was appointed the Catholic Church's 265th pope. Benedict XVI, as he is now called, represents for many in the Church an attempt to restore conservative values and traditions. For others, especially those critical of the Church's standing on issues such as AIDS, women and gay marriage, the new pope reflects a turning-away from the needs and interests of a modern society.

DW-WORLD takes a look at the new pope's background, the first to come from Germany in 500 years, his rise through the Catholic Church, the issues he stands for and the criticism surrounding him.

The New Pope: Blessing or Blunder?

Comments from DW-WORLD readers on the new pope, Benedict XVI, have been pouring in. He's getting mixed reviews. Share your thoughts via e-mail or our readers' forum. (April 20, 2005)

Pope Benedict XVI was inaugurated as pope Sunday as the Catholic Church unveiled its full pomp and pageantry in a joyous ceremony in front of world leaders and up to half a million pilgrims in Saint Peter's Square. (April 24, 2005)

After his election as pope, British tabloids highlighted Cardinal Ratzinger's past as a teenager in Nazi Germany, raising the ire of German daily "Bild" and of some DW-WORLD readers. (April 22, 2005)

Britney's got hundreds, Cher's got her share. In fact, any celeb from minor on up has an Internet fan site. So does the Grand Inquisitor for Mother Rome, Cardinal Joseph Ratzinger, known as "Ratzy" to Internet friends. (April 16, 2005)

The German Green Party and a major gay rights group have criticized a speech by Pope Benedict XVI in which he said gay marriage was based on a trivialization of the human body. (June 8, 2005)

Royalty-obsessed Germans now finally have a new sovereign to call their own: As the new pope, Benedict XVI became the Vatican's head of state on Tuesday, but he'll still keep his German passport. (April 22, 2005)

"The Great Inquisitor" and His Critics

While millions of Catholics around the globe were celebrating the election of their new leader, critics started voicing their concerns over the new pope as a harsh champion of staunch conservative values. (April, 21, 2005)

The first German pope in centuries is coming to his home country in August. One German carmaker is already offering a small miracle on four wheels. (April 21, 2005)

German newspapers were torn Wednesday between pride over the election of the first native son in five centuries as pope and concerns over the choice of the staunch conservative Joseph Ratzinger. (April 20, 2005)

Pope Benedict XVI says he's open to dialogue both within his own Church and with other faiths during his first public Mass Wednesday, signaling a commitment to continue the reconciliatory stance of his predecessors. (April 20, 2005)

My Brother, the Pope

What happens when your brother takes on a new job and becomes the leader of the world's 1.1 billion Catholics? You would probably want to give him a call. But it's not that easy. (April 20, 2005)

Germany's top-selling newspaper Bild was furious on Thursday at the coverage of the new pope by British newspapers, which had accentuated Benedict XVI's past as a teenager in Nazi Germany. (April 22, 2005)

If his past statements are any indication, Pope Benedict XVI will continue to tread the conservative line that was among the defining characteristics of his predecessors long reign. (April 20, 2005)

Congratulations flooded in for Pope Benedict XVI's from his German compatriots, after Cardinal Joseph Ratzinger was elected the Catholic world's leader on Tuesday. But some in Germany viewed the choice as a mistake. (April 19, 2005)