Pope Benedict XVI was inaugurated as pope Sunday as the Catholic Church unveiled its full pomp and pageantry in a joyous ceremony in front of world leaders and up to half a million pilgrims in Saint Peter's Square. 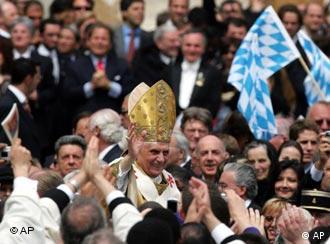 Bavarian flags for a Bavarian pope

The pope was solemnly bestowed the insignia of his high office -- a scarf-like woollen pallium hung around his neck and the Fisherman's Ring -- during the open-air mass, watched by millions on television.

On a joyous day for the Church's one billion Catholics, the new pope seized the moment in an ebullient homily in which he issued a rallying call for Christian unity and said that the "young" Church held within itself the future of the world.

"During those sad days of the pope's illness and death, it became wonderfully evident to us that the Church is alive. And the Church is young," he said, answered by a great welling of applause from the massive, flag-waving crowd.

"She holds within herself the future of the world and therefore shows each of us the way towards the future," said the pope.

In his message, the pope appealed for the unity of Christian Churches, saying there should be "one flock, one shepherd." 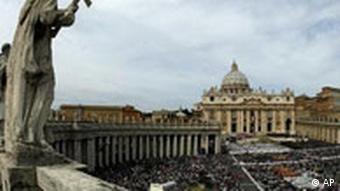 In Benedict XVI's first public mass as pope, there were signs of a growing rapport with ordinary Catholics as pilgrims interrupted his homily more than 30 times with encouraging applause, particularly following his repeated requests to "pray for me" as he begins his pontificate.

"And now at this moment, weak servant of God that I am, I must assume this enormous task, which truly exceeds all human capacity. How can I do this. How will I be able to do it?" he asked, answered again by an encouraging ovation.

"I am not alone," the pope said. "And your prayers, my dear friends, your indulgence, you love, your faith, and your hope accompany me."

The 78-year-old pontiff, wearing a gold robe over sacred white vestments, emerged from St Peter's Basilica at the start of the mass in a procession of 150 cardinals as a choir chanted the Laudes Regiae, a litany invoking divine assistance for the new pontiff. 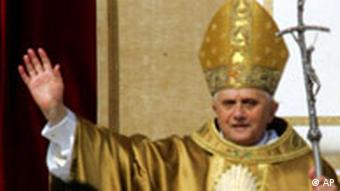 Waving to the crowd before the mass

The huge crowd erupted into applause and a frenzy of flag-waving fervor when the new pope smiled and waved as he stood for a few moments before the doors of the basilica.

Shortly before, the new pontiff and Patriarchs of Eastern Catholic churches gathered around the tomb of St Peter, the apostle chosen by Jesus as the first leader of his church.

With many world leaders attending the mass, Italy deployed an array of security measures including 10,000 security forces, and has closed airspace over Rome and the Vatican, protected by Hawk anti-missile systems and an AWACS surveillance plane.

Among the dignitaries were King Juan Carlos and Queen Sofia of Spain, the latter wearing a traditional white lace dress and mantilla.

President Horst Köhler and Chancellor Gerhard Schröder were attending from the pope's native Germany, as well as Italy's Prime Minister Silvio Berlusconi, Britain's Prince Philip and a host of other heads of state and government and ministers from 140 nations.