Pope′s Birthplace Ecstatic as Visitors Flock | Europe | News and current affairs from around the continent | DW | 20.04.2005

Residents of Joseph Ratzinger's tiny birthplace of Marktl in Bavaria who have greeted his election as Pope with unrestrained joy and partying now find themselves at the center of world attention.

Marktl has been in the grip of pope frenzy since Tuesday

The 2,500 residents of Marktl am Inn, a sleepy village in eastern Bavaria near the Austrian border, were probably the happiest when news of Cardinal Joseph Ratzinger's election as new Pope Benedict XVI broke late Tuesday afternoon.

The village, where the new Pontiff was born 78 years ago, burst into spontaneous jubilation as residents lit fireworks and led a procession through the community accompanied by a brass brand. The town's volunteer firefighters organized an impromptu party fuelled by free beer as the faithful chanted "Benedict from Bavaria, we want to celebrate you!" 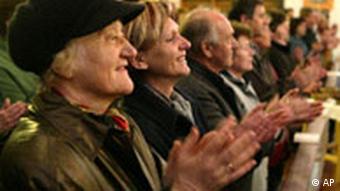 In the evening, inhabitants packed into the village's overflowing church, where the new pope was once baptized with the name 'Joseph,' to attend Mass in an electrified atmosphere.

"It's the most beautiful day, I think. What's happening here in Marktl, during mass and even before that, it was crazy," Kaiser told German radio station BR. "We're completely overwhelmed."

He added that the news of Ratzinger being elected pope had been a thunderbolt.

"I was stunned. I was speechless. I never thought it could be a German pope," Kaiser said after the service at the church. 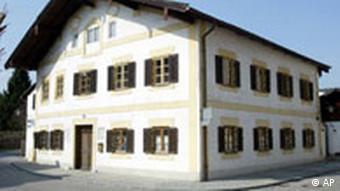 The house in Marktl where Joseph Ratzinger was born

A huge picture of the silver-haired Ratzinger, surrounded by white roses, was hung in front of the town hall, close to the a 15-room building where a plaque marks Ratzinger's birth on April 16, 1927. Streamers in the yellow and white colors of the Vatican were unfurled from the windows of houses.

"This is a huge event for us. It's difficult to grasp because it's all so new," said village mayor Hubert Gschwendtner. "But, it's a huge source of happiness to us and an honor. We're naturally proud because the cardinal (the present pope) is our honorary citizen."

Dealing with a visitor flood

But, even amid the euphoria, residents have to contend with a growing number of journalists and camera teams from around the world and pilgrims, particularly from neighboring Austria, who are all making a beeline for the Pope's tiny birthplace and shattering the calm.

The village's market square is already overflowing with television equipment, media vans and busses. Village authorities are now grappling with the problem of accommodating all the visitors.

Mayor Gschwendtner, who has been besieged by interview requests by journalists as far away as Mexico and Japan, admitted that the whole media hoopla was a bit tiring.

Some, however, have been quick to sense a commercial opportunity, hoping that the centuries-old village of Marktl on the river Inn would get a badly-needed boost from Ratzinger's residency. 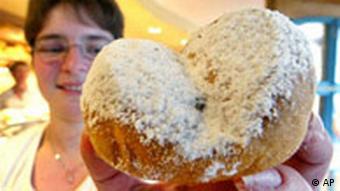 A baker in Marktl shows off the latest papal pastry

Bakers in the town were making special "pope bread" with cinnamon and raisins, suitably decorated with a cross, and marzipan-glazed "Pope Benedict XVI" cakes.

"It's just super for us," Gertraude Becker, 48 told Reuters. "Business is insane today. I've never seen anything like this before. Everyone's coming to Marktl."

The grilled sausage sellers were also quick to cash in, promising a special papal version would go on sale later in the day.

The new pope, who is an arch conservative, may have caused dismay elsewhere in Germany, but the he has been welcomed without reservations in Marktl. 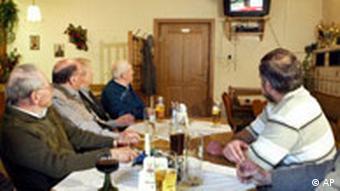 Citizens of Marktl sit in a pub as they watch television showing black smoke billowing from the chimney at the Vatican in Rome, Tuesday, April 19, 2005.

A resident, Karl Mühlthaler, said he hoped Ratzinger's election would attract the faithful to the town.

"I want the world to see how beautiful it is here," he said, holding up postcards of the town to the cameras of the world's media despite the rain.

Mühlthaler had happy memories of meeting the then cardinal when he visited his hometown in 1997 to be made an honorary citizen.

"Cardinal Ratzinger is a very pleasant man, not at all the distant figure he is portrayed as in the newspapers," Mühlthaler said.

German newspapers were torn Wednesday between pride over the election of the first native son in five centuries as pope and concerns over the choice of the staunch conservative Joseph Ratzinger. (April 20, 2005)