Matthias Maurer is Europe’s new astronaut. He may have to wait five years before he flies, but he’s the patient sort. And that leaves him time to learn Chinese. He told DW why space is a unifying force. 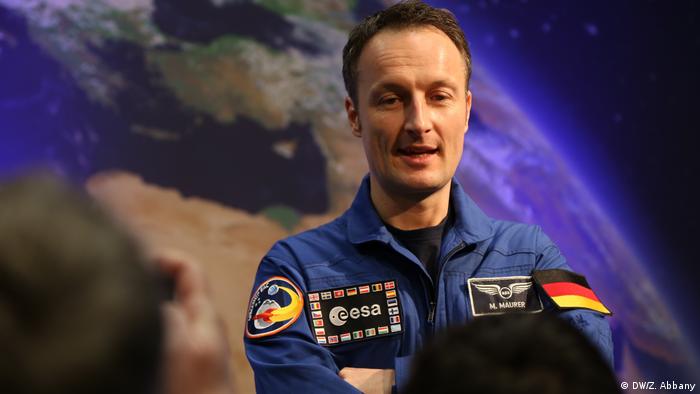 Deutsche Welle: As the first new German astronaut after Alexander Gerst there are going to be comparisons, and even here today (2.2.2017) at the European Space Operations Centre in Darmstadt, you were almost introduced as Gerst. How are you going to jump that shadow? What do you bring to the table?

Matthias Maurer: Well, you said it: Alexander Gerst is very well known in Germany - he's famous here. That's because he did an outstanding job. He flew the 2014 Blue Dot mission. And next year he flies again and then it'll be as commander of the International Space Station (ISS). So I believe he did an outstanding job, and I want to follow his example. But I also want to try to find my own profile.

And what would that profile be? Would it be in the science you do?

Yes, I'm very much into science. But today is my first day as an astronaut. So I will begin with [my training] and the sharper profile will come later.

But tell us a bit about your scientific background. What is your area of speciality?

I studied material science engineering in Germany. I also studied in the UK, in Leeds, and in France and Spain. So I'm a material scientist with a European training as my background. Material science focuses on the development of new materials, which are the basis of innovation and economic progress. 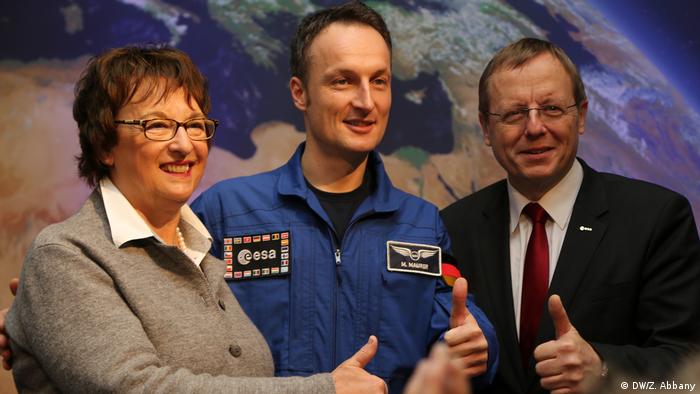 The Spanish satellite was developed by Germans and launched on a Russian rocket from French Guiana. It carried the first implementation of a new satellite platform that Germany hopes to further roll out in coming years. (28.01.2017)

Japanese satellite may have spotted largest ever gravity wave on Venus

Believed to have been created by the planet's huge mountains and quick winds, the 10,000-kilometer-long gravity wave would be far larger than anything similar recorded in our Solar System so far. (17.01.2017)

ESA chief Jan Wörner on ExoMars, the future of Plato and a moon village

In an interview with Deutsche Welle, Director General of the European Space Agency, Jan Wörner, outlined the agency's plans for Mars, the moon and dealing with satellites in deeps space. (18.01.2017)

So you do some science up at the ISS, you bring it back down to Earth, and what should we imagine we might end up having in our pockets at the end of it? Make it real for people.

Well the best example I can give you about a space innovation is this: Perhaps you have a mobile phone with a fruit on it [Ed.: We think he means an Apple iPhone]… and perhaps the casing is made of glass metal. That's a technical term. And metal glasses were actually developed in space, on the Space Shuttle, in the 1980s. NASA patented the procedure and the production method, and only now - 20 or 30 years later - this invention is in our pockets, as you said.

Let's look into the future now, because you've spoken a bit about the moon and the plans for a Moon Village. What is about the moon that fascinates you?

The moon is fascinating because it's there. Everyone knows it and sees it, and we can learn so much on the moon. We can use the moon as a base for astronomy. The earth's atmosphere absorbs certain wavelengths that the scientists therefore cannot see on Earth, so it's really important to observe these from the moon, which has no atmosphere. But we can also learn about the moon itself. The moon is a dead body, so we can learn about the history of Earth and how our solar system evolved. These are data that scientists need to accurately predict where in the universe we can find life.

But while you say you wouldn't take a one-way ticket to Mars, would you spend an extended period of time on the moon?

Definitely, definitely. Now when we travel to the ISS we spend six months there, or even 12 months, and I believe a similar amount of time on the moon is absolutely feasible.

So when do you think is the next most realistic opportunity for you to be in space? With Gerst's mission as ISS Commander in 2018, you probably won't make that because all the seats have been reserved. So when is a realistic time?

Currently we have Thomas Pesquet in space. Later in the year we will have another European astronaut, Paolo Nespoli flying, in 2018 Alexander Gerst, and in 2019 it's Luca Parmitano. On average we have one flight per year. So the next free flight is 2020. But there are other astronauts who are looking to take that seat - not only me.

When you say "one flight per year” you mean for European astronauts…?

Yes. It's one flight per year on average for European astronauts to the ISS. But there are also new opportunities, like the Chinese space station which will be ready by 2022. We are working towards a cooperation with the Chinese, although that still needs to be established.

That's an exciting development, isn't it?

It is absolutely exciting. And I think it's an excellent way to show how spaceflight actually brings people and the world together. It's also a very good thing in politically uncertain times to have spaceflight cooperation because that unites people and always builds a base.

Matthias Maurer is the newest recruit to the European Space Agency's astronaut corps. He has a doctorate (PhD) in materials science engineering and holds more than 10 patent applications, with half being international registrations.