Five hundred years after the Fuggerei estate was opened in Augsburg, the rents remain under €1, and diverse people facing financial hardship still have housing security.

Imagine, for a second, if your rent was 88 cents — a year. And it hadn't changed for the past 500 years. Yes, you read that right. Welcome to the Fuggerei.

Located in the Bavarian city of Augsburg, the Fuggerei is considered to be the oldest social housing project in the world and continues to provide subsidized housing for Augsburg residents facing financial hardship.

Today, about 150 people live in the Fuggerei, spread out across 140 apartments. The Fuggerei gets about 30 to 40 applicants a year, with a waiting list that's currently 80 people long.

A family's chance to start fresh

Noel Guobadia is a cheerful 27-year-old who's lived in the Fuggerei since he was a teenager. His then-single mother was struggling financially when she moved with Guobadia and his younger brother to the estate.

At first, Guobadia was apprehensive.

"It is an old estate where the majority of the people who lived there at the time were elderly, and I kept worrying about how this was going to work out," he told DW. "We were the first family with an obvious migrant background. Some of the residents might be shocked."

The Fuggerei's layout, which offers spaces to congregate and encourages social interaction among neighbors, helped dispel any hesitation.

"Communication solves everything," Guobadia said. "We all sat together in the beer garden. You help the occasional person set up their TV, and soon it's like you have a second family."

When he was 20, he moved into his own apartment in the Fuggerei, just a couple of doors down from his mother and brother. He considers the "Omis and Opis" of the Fuggerei his pals with whom he shares jokes, beers, and receives advice.

One of the Fuggerei's most unique aspects is its unchanged yearly rent of one Rhenish guilder, which corresponds to less than €1 ($1.17) in today's currency.

For Guobadia, the Fuggerei's low living cost was a chance to be able to develop as a young adult, without the crippling stress of trying to make rent.

"[The Fuggerei] took away one of my biggest fears: I was able to live with the little money that I was making during my traineeship because that big burden of rent was removed," he said. "I was given a chance to focus on myself and to start building foundations for my life." 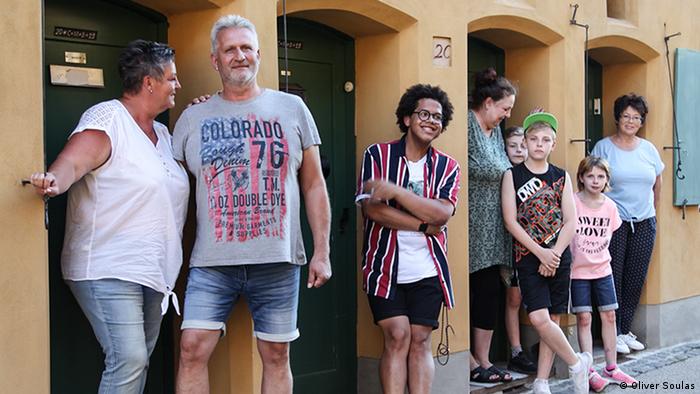 A sense of community

Ilona Barber has been a resident of the Fuggerei for the past six years, after struggling to survive on her meager pension.

"At Christmas, I received the message that I was getting the flat. That was my Christmas present," the 71-year-old said. She moved into a 55-square-meter (590-square-foot) ground floor apartment with her two dogs, two cats and six birds, and has become a fixture of the Fuggerei.

When she's not working at the cash register by the front gate, collecting the entry fee from tourists — one of the Fuggerei's sources of income — she's running small errands for her neighbors and attending the community events like movie nights and coffee hours.

"I cherish the solidarity, the community that we have here," she said. "And the fact that you don't need to be counting every cent."

The Fuggerei also provides residents with access to two social workers, including Doris Herzog — whose responsibilities include fielding and reviewing applications, mediating disputes between neighbors, and helping out with bureaucratic tasks.

"I contact the health insurance companies, the medical services, and often accompany people to their meetings to ensure that they get what they need to continue living as independently as possible in their own homes," Herzog explained. 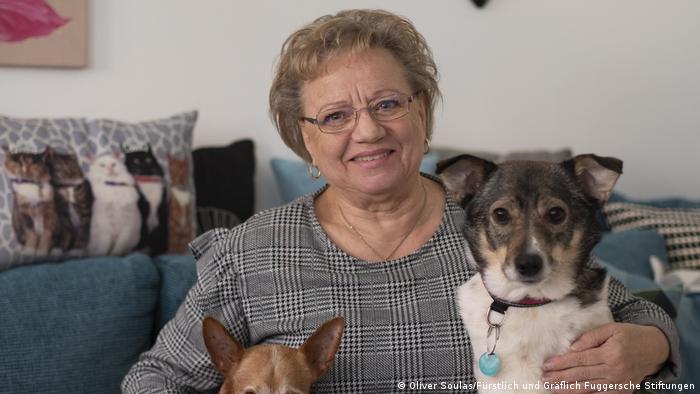 Ilona Barber with her dogs in her Fuggerei apartment

It's not only the Fuggerei's rent that has remained unchanged since 1521. Another key rule: Residents need to pray for the founder Jakob Fugger three times a day.

The condition is part of the rental agreement, and relates to another condition for living in the Fuggerei: Tenants must be Catholics.

While it's rather hard to check whether every resident is completing their three daily prayers, Herzog does check applicants' status with the parish office to ensure that they're part of the Catholic community.

Applicants must also be official residents of Augsburg, and those who are able are expected to help out with small jobs around the Fuggerei such as gardening or working as a nightguard.

And after 10 p.m., the gates to the Fuggerei are officially closed — residents who want to enter after that time need to pay a small token to the night guard on duty, usually 50 cents.

'Village within a city'

The estate resembles a sort of medieval gated community, complete with green spaces, a small square where residents can sit on the surrounding benches and catch up, and a fountain. Residents and staff often describe the Fuggerei "a village within a city." The Fuggerei in 1973: For centuries the estate has retained its village feel

The estate's namesake is its founder, Jakob Fugger, a prominent Augsburg merchant and entrepreneur whose family name was synonymous with copper trading. While Fugger required his tenants to pray for him three times a day as a strategy to limit his own time in purgatory, he was also a pioneer in terms of creating affordable housing for the poor.

Astrid Gabler, the head of communications at the Fugger Foundation, said Fugger's idea of creating a space for impoverished citizens to get back on their feet was unusual for the time. "Fugger gave people the chance to have a right to privacy when they slipped into poverty," she said.

At the time, impoverished families were often split up and sent to workhouses. "Fugger kept families together," Gabler explained. "He believed that families that had their privacy had a better chance of getting back on their feet."

On August 23, 1521, Fugger signed the decree founding the Fuggerei. The estate would continue to grow and change with the advancing centuries: More apartments were added, as well as a gift shop and museum for the growing number of tourists who visit each year. During World War II, a bunker was built to protect residents from bombings.

Looking into the future

Gabler said a key component of the 500th anniversary celebration was the so-called "Fugger Code," a blueprint for future Fuggerei estates across the world.

"Jakob Fugger created the Fuggerei 'in exemplum,' meaning as a model," she says. "We want people to think about building Fuggereien of the future across the world." 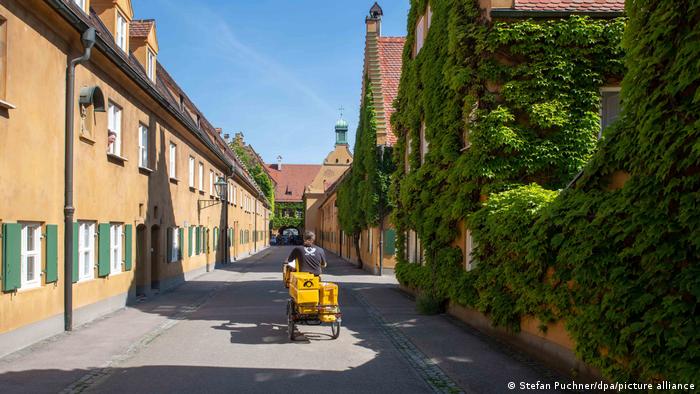 Privately owned with strong social values: Can the model be the basis for future Fuggerei estates?

The Fuggerei is owned by the Fugger Foundation and supported by a fund managed by a senior council, which is composed of current members of the Fugger family elite.

So, while the Fuggerei advocates for sustainable, independent social housing on the one hand, it remains tightly intertwined with generations of the Fugger family.

Will the Fuggerei estates of the future follow this model, based on privately held wealth, or will they be publicly funded foundations? Or a combination of both? These are questions that the Fuggerei's yearlong anniversary celebrations looked into.

To mark the end of the Fuggerei's 500th anniversary year, events under the banner "Fuggerei Next 500" will be held in Augsburg from May 6 to June 12, 2022, to discuss the future of this social housing project, along with ideas to inspire similar initiatives worldwide.

As the Fuggerei and its residents look toward the future, the anniversary also offered an opportunity to reflect on the past, and on the importance of this history for many people.

"I was the youngest person who lived alone in the oldest social housing project in the world. I should have gotten that printed on a hoodie," Guobadia said, laughing.

This article was first published in August 2021 and was updated at the end of the 500th anniversary year.

Augsburg is known for its puppet theater and students

Augsburg was originally built by the Romans over two thousand years ago. Later, in the Middle Ages, merchants brought wealth and prosperity to the city. Its rich history is evident wherever you look.

Considered the world's oldest social housing project that's still in use, the Fuggerei in the Bavarian town of Augsburg is celebrating its 500th anniversary.