Germany's largest department store chain, Karstadt, has announced it might close 77 of its stores, primarily in smaller cities and towns. Some are worried that town centers that lose a major store will begin to atrophy. 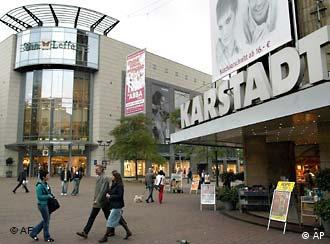 If big downtown stores go under, so could their smaller neighbors

The major restructuring plan announced by the department store giant is aimed at putting an end to its financial freefall--the KarstadtQuelle group will have pre-tax losses of up to €1.3 billion ($1.6 billion) this year. But in getting itself out of the red by possibly shutting 43 percent of its stores, it could help to cripple entire town centers, which are heavily dependent on the big chain's ability to lure consumers.

"In many cities, the big stores function as magnets for shoppers," Jan Blanek, a researcher at the Urban Planning Institute at the University of Stuttgart, told DW-WORLD. "When those shopping magnets pull out, a large number of customers stay away as well." 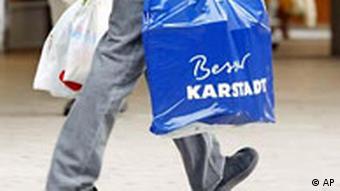 Shoppers are carrying around fewer bags these days

That has serious ramifications for city centers that are already struggling to attract customers. The weak national economy and planned reforms of the welfare system and labor market have spoiled the mood of many shoppers, who are staying away from stores in droves. The closing of a major retail center, leaving a large hole at the heart of the town, would only exacerbate the problem.

"When such a large store closes and no other business moves into the building, it can have a crippling effect with very serious consequences, not only for the population, but for the whole city," Gerd Landsberg, head of the Germany Federation of Cities and Municipalities, told the Berliner Zeitung newspaper.

Over the last decade, a vicious circle of atrophy has already begun in several medium-sized cities in Germany, particularly in the eastern part of the country.

"We started seeing town centers begin emptying out in the mid 1990s," Beate Glöckner of the IRS Institute for Regional Development and Structural Planning told DW-WORLD. "The trend has begun to accelerate."

Now city planners and demographers fear that the Karstadt closings could mean that vicious circle is about spread to even more municipalities.

"It can be the beginning of the decay of a town's infrastructure," Reiner Klingholz, director of the Berlin Institute for World Population and Global Development, told DW-WORLD. "Certain shops close, windows are shuttered, and this makes the place unattractive, not just for shoppers and existing businesses, but for new businesses as well."

The Karstadt store in the Bavarian town of Deggendorf is one of the outlets threatened with closure. While the news has the store's 120 employees worried about their careers, it also has surrounding businesses fearing for their own futures.

"It's terrible," Sait Ögütmen, owner of a snack bar next to the department store, told the Süddeutsche Zeitung newspaper. "The whole square here will deteriorate."

In fact, more and more often in Germany, new businesses are avoiding town centers and choosing to set up shop in the open countryside on the outskirts of town. Already, only around a third of retail establishments in Germany are in town centers. 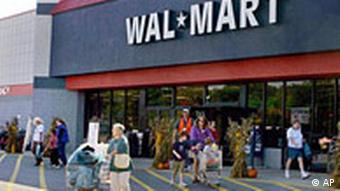 Wal-Mart stores in the United States do a booming business

It's a similar phenomenon to the Wal-Mart story in the United States. Now the world's largest store chain, Wal-Mart embarked on a massive expansion course in the 1990s, setting up its warehouse-like stores in former farm fields, where it could offer customers plenty of free parking and a huge selection of merchandise, often at rock-bottom prices.

The result, however, was that smaller mom-and-pop stores up and down Main Street in small-town America could not compete and were forced out of business. Today, many stores in traditional small town centers are boarded up while the real centers of retail activity have shifted to the conglomerations outside the town limits. 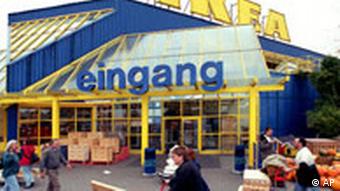 Germany is seeing a similar development and the success stories on the German retail landscape, such as Swedish furniture giant IKEA, electronics superstore MediaMarkt or the booming home improvement stores are enthusiastically following the new concept.

"They've developed whole shopping centers, offering acres of parking and a conglomeration of stores close to one another," Blanek said. "They've been able to give consumers a new kind of shopping experience. Traditional stores like Karstadt have not."

Politicians of all stripes have been calling on the government to formulate a strategy to revitalize town centers as economic centers. Some have called on local politicians to stop issuing approval permits for large shopping centers built outside of town.

But city planning researcher Blanek does not think town centers are an endangered species just yet. He said there are strategies that store owners and municipal governments can follow to keep the downtown retail drain from accelerating. He said key is not trying to compete with the outlying superstores, but rather to offer consumers an attractive shopping alternative.

"While the loss of the large magnet stores will be painful, town centers do not have to be solely dependent on them," he said. "There are other possibilities they can use to bring shoppers back." 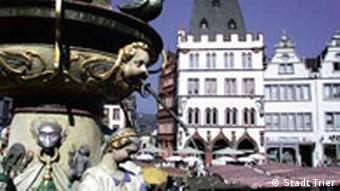 Medieval town centers, like this one in Trier in western Germany, offer a unique shopping experience

He suggests that stores in town centers cooperate on several levels, such as harmonizing their opening hours, establishing special incentives for shoppers to come downtown, or redesigning their shopping areas to take advantage of the unique historical character of the area.

"Town centers have things to offer consumers that the big superstores centers out of town cannot," he said. "The shopping experience is, you might say, more authentic. People like that."

Karstadt to Explain Plans to Employees

KarstadtQuelle's employees and company officials are meeting all over Germany Wednesday to discuss the company's restructuring, which labor unions are calling a slap in the face disguised as reorganization. (Sept. 29, 2004)

Due to a weak economy, falling birthrates and higher numbers of people relocating to find jobs, some German regions are losing population; their cities are shrinking. The problem is especially acute in eastern Germany. (Sept. 3, 2004)