The German encyclopedia publisher Brockhaus said it would place its reference works on the Internet to offset falling revenues. Unlike popular reference work Wikipedia, it will be ad-sponsored and professionally edited. 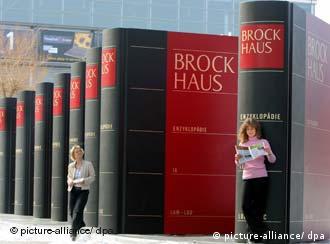 Brockhaus has been the leader in encyclopedia knowledge in Germany

It's the paper death of a classic. The German publisher Brockhaus has been printing its encyclopedias for nearly 200 years, and anyone who's had the money has boasted a collection of the handsome works on their bookshelves for all the world to admire.

But the Internet has been a thorn in Brockhaus' side years now, forcing the company to reevaluate its strategy. The German version of the democratic digital reference work Wikipedia has been seen as cutting into Brockhaus' profits.

"Though official figures are not yet out for 2007, we can expect losses of around several million euros," a Brockhaus spokesperson said earlier this week. 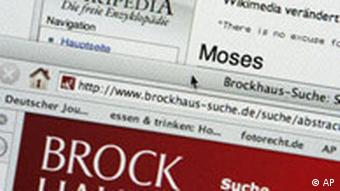 The publisher's management is reviewing ways to reduce costs, which could also include slashing around 50 jobs at the Mannheim office. Brockhaus employs nearly 450 people nationwide, around 250 of whom are in Mannheim.

Brockhaus is planning to launch its free encyclopedic portal in mid-April, with the publisher banking on its soundly researched information to set itself apart from Wikipedia, which can be edited by all Internet users.

"Brockhaus Online will provide relevant, reviewed information from all fields of knowledge," a press statement said.

The Brockhaus branch in Leipzig, which includes about 60 employees, was transformed into a purely online editorial office last year.

Brockhaus said it would fund its new Internet product through advertising. The company also intends to create an online service for schools that will be free of advertising.

The future is online

"Market analyses clearly show that customers will research specific information on the Internet more and more in the future," the Brockhaus spokesperson said. 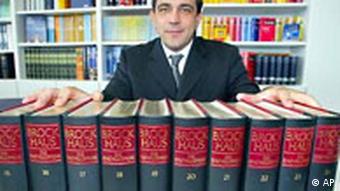 The 21st edition of the Brockhaus encyclopedia was likely the last in printed form. "Now, everything will happen online," the spokesperson said.

"But, we will clearly distinguish ourselves from providers like Wikipedia, by banking on relevance, accuracy and reliability," the spokesperson said. "And, our information cannot be manipulated."

The online reference work Wikipedia was established in 2001, with the aim of having Internet users themselves create the encyclopedia's content. The Web site's democratic nature has made some of its entries on contested subjects prone to manipulation. Several studies have, however, shown that Wikipedia's error rates are on par with those of major encyclopedias.

Millions of people around the world use the service. According to Wikipedia, 10,000 people regularly write entries in Germany alone.

Donations cover Wikipedia's annual worldwide costs of $5 million (3.4 million euros), most of which is spent on technological equipment and administration.

The combination of the Internet and computer screen reader software means blind people now have more access to written information than ever before. But bad Web design is making accessibility difficult. (25.11.2007)

What do you think about Brockhaus's changed course? Is the Internet the future? Please include your name and country in your reply.