Pro-Palestinian and pro-Israel demonstrators peacefully marched in Berlin amid a struggle to define the line between criticism of Israel and anti-Semitism. The government urged people to show support for Jews and Israel. 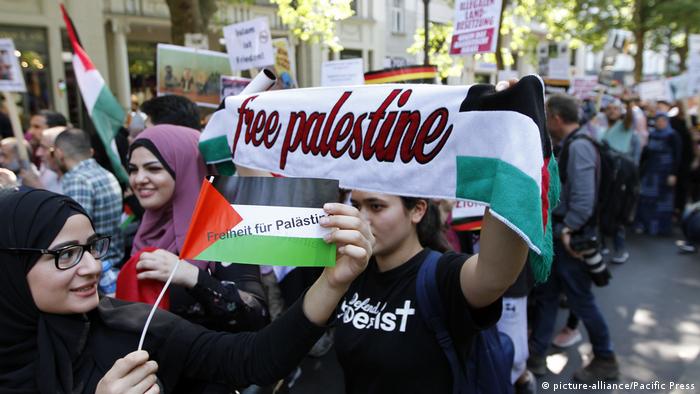 Hundreds of pro-Palestinian protesters snaked through the streets of the German capital on Saturday shouting anti-Israel slogans against the backdrop of rising concerns about anti-Semitism in the country.

Of the 2,000 banner and flag-waving protesters in the al-Quds march some chanted "Child murderer Israel" and "Zionism is racism," while others in the same protest expressed support for Palestinians with signs reading "Free Gaza" and "Palestine will be reborn!" At the same time, demonstrators sought to dispel accusations they were anti-Jewish by shouting, "Anti-Semitism is a disgrace."

The annual al-Quds Day march, or Jerusalem Day in Arabic, came as German officials, from the president to the country's anti-Semitism commissioner, called on people to show solidarity with Israel and Jews at a time anti-Semitic crimes in Germany have increased, the vast majority committed by right-wing extremists. Others, including the Central Council of Jews in Germany, called for the al-Quds march to be banned.

The controversy reflects ongoing debates within Germany, given its Nazi past, that intersect with wider political issues as well as questions of human rights. It also gets to the heart of the battle raging over what is considered anti-Semitic and legitimate criticism of Israel.

"It's absolutely unacceptable that, in 2019, we hear anti-Semitic, anti-Jewish slogans in Germany," Anti-Semitism Commissioner Felix Klein told DW ahead of the al-Quds march. "We should all stand up against that. We should unite as German society, saying we do not accept any form of anti-Semitism here."

Klein made headlines earlier in the week when he warned Jews against wearing the Jewish yarmulke in all public places.

"I am sorry to say that I cannot recommend that Jews wear the kippa everywhere in Germany," he told the Funke media group, using another term for the skullcap. He later called on Germans to wear the yarmulke to show support for religious tolerance and freedom.

'Supporting Palestinian rights is not anti-Semitic'

Tom, an American Jew living in Berlin who preferred not to give his full name because his comments may anger some in his family, joined the protest holding a sign reading "Jews for free Palestine."

"In Germany, people are not comfortable with expressions of criticism of Israel. I want to show that supporting Palestinian rights is not anti-Semitic," he said, noting that he also might not agree with the positions of some others at the protest. "Israel is not representative of the Jewish community."

Leila H., a headscarf-wearing woman who declined to give her last name, dismissed labels of anti-Semitism as propaganda.

An estimated 600 pro-Israel counterprotesters — made up of anti-fascists, feminists, LGBT+ supporters, members the Iranian opposition and others of various persuasions — also took to the streets against the al-Quds protests.

Their causes ranged from calling for regime change in Iran and condemning Hamas and Hezbollah to showing support for Israel and expressing concern over anti-Semitism in Germany.

Mariane said she came to the rally to denounce anti-Semitism and express her support for the country of Israel, which she said was particularly important given Germany's role in the Holocaust.

"The Jews are a special nation because God has given Israel to them," she said. "Sometimes it's not logical, but it's God's word in the Bible." 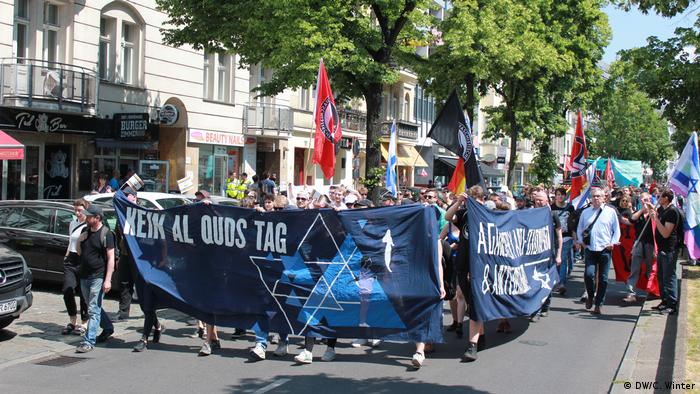 "The issue is not about what is happening domestically in Israel," he said, referring to Israel's human rights record and its religious-nationalist right-wing government. "It's about this type of protest questioning the right of Israel to exist happening in the center of Berlin."