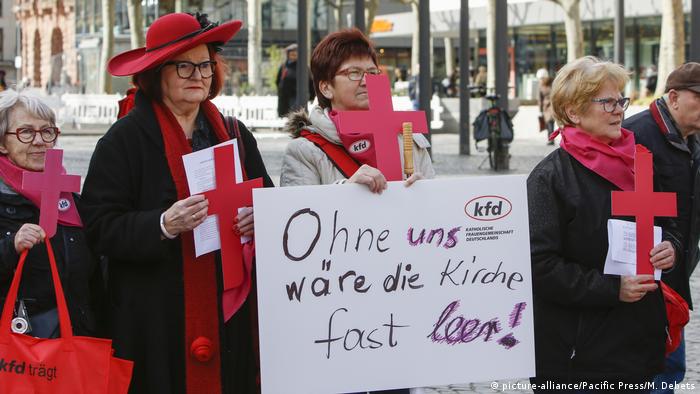 Catholic women in Germany have intensified their demand for more sway in the church as leaders met on Tuesday to elect a new leader of the Catholic Church in Germany.

Women's rights advocates on Monday had presented church leaders at the German Bishops Conference —the governing body of the Catholic Church in Germany — with a petition with over 130,000 signatures calling for more women in leadership roles. More than 50 women also gathered outside the cathedral in the western city of Mainz, where the conference is taking place, to show their support for the movementcoined "Maria 2.0" ("Mary 2.0").

Bishops and other officials from Germany's 27 Catholic archdioceses have gathered at the annual, four-day event to discuss key church issues and to elect a successor to outgoing conference chairman Reinhard Marx.

Marx's successor must "lead into the modern world, into the equality that is lived in Europe and in many countries around the world," Mechthild Heil, federal chairwoman of the Catholic Women's Community of Germany, said to Germany's SWR on Tuesday.

If the new spokesperson for the Catholic bishops is not willing to reform, "that would be the worst thing for us," Heil continued, adding that the protesters do not "want to divide, but are the core of those who carry the Catholic Church".

In terms of gaining leadership roles within the church, Heil, the leader of Germany's largest Catholic women's association said, "We have not made any progress at all."

"We carry the local congregations. I think it's quite natural that we want to take on responsibility and thus also power".

Responding to the petition, Marx on Monday said, "You can expect that I will do my utmost to make sure that this issue doesn't get sidelined."

The Bishop of Mainz Peter Kohlgraf has since suggested that a woman could be appointed to lead the conference's administerial department.

"We could also have a woman leading the secretariat of the German Bishops Conference. That would be an important sign that women could get into management positions," Kohlgraf said.

Mariendonk Abbey: A shortage of nuns

In the Catholic Church, ordained ministries like that of a priest or bishop are reserved exclusively for men.

The German Catholic Church is currently in the midst of a reform process that has, among other things, asked leaders and parishioners to reconsider the position of women and to question the roles of power and sexual morality in the church, including the child abuse crisis.