Several events in the Bavarian city, including a human chain with hundreds of people, were held to remember the victims of a shocking knife attack exactly one week ago. The victims were killed at a department store

The Bavarian city of Würzburg is holding several memorial events Friday, one week after a man stabbed three women to death in a department store.

Police said around 600 people formed a human chain extending from the "Juliuspromenade" near the area where the attack took place, to the Würzburg city hall, some 650 meters (2,100 feet) away. 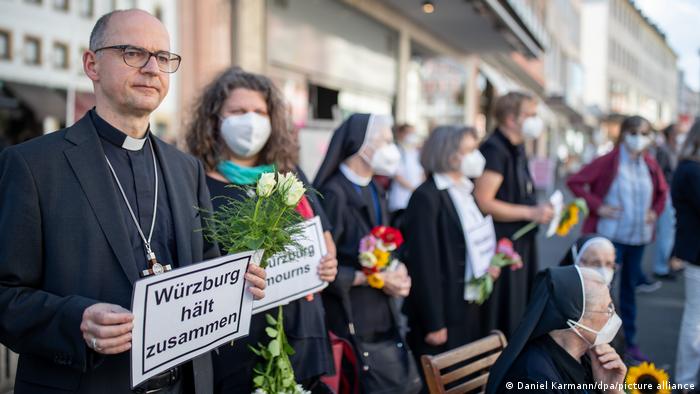 At 5 p.m. around the time when the attack took place, church bells rang out a call to prayer.

The Würzburg Alliance for Democracy and Civil Courage, which helped organize the event, said it wanted to also show solidarity with members of the emergency services, along with people with migrant backgrounds who may be experiencing prejudice following the attack. 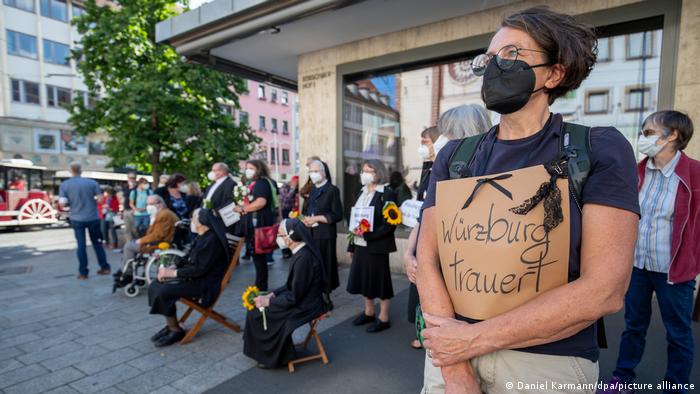 Organizers said they wanted to demonstrate a "different form" of mourning

What is known about the attacker?

According to police, 24-year-old Somali man walked into a department store last Friday, asked a saleswoman where the knives were and stabbed three women to death before attacking people outside.

The suspect, currently in pretrial detention, has lived in Germany since 2015. The man reportedly was being treated for psychiatric problems.  Bavarian Interior Minister Joachim Herrmann has said there are indications the man may have been motivated by Islamic extremism.

Other events in Würzburg

Later in the evening, a gathering of around 90 people at the main train station is being organized by Antifa, Fridays for Future, and the migrant rescue organization Sea-Eye, according to the city of Würzburg.

It is still unclear why a 24-year-old Somali man fatally stabbed three women in the city of Würzburg. DW's Johanna Rüdiger first met him in 2018, when he and a friend had been attacked by thugs in eastern Germany.

At an emotional memorial service, Würzburg mourned the deaths of three women who were killed in a knife attack. With the motive still unclear, officials urged against responding to the attack with "hate and revenge."