The pilot escaped via the ejection seat and is being treated for minor injuries at a nearby hospital. The US Air Force confirmed it was one of its F-16 fighter jets. 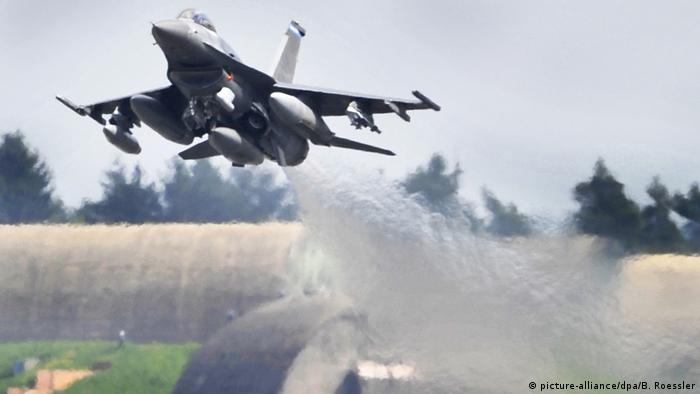 A US F-16 fighter jet taking off from the Spangdahlem air base.

The plane crashed into a forested area outside the southwestern city of Trier near the Luxembourg border, with the pilot ejecting to safety.

The US Air Force confirmed that the plane is one of its F-16 fighter jets stationed at the US air base in Spangdahlem in Rhineland-Palatinate.

The cause of the crash is as yet unclear. The pilot was engaged in a routine training flight.

Authorities said the pilot was transported to a nearby hospital, but described the injuries as "minor."

A large amount of jet fuel is said to have spilled out at the site of the crash and a search is underway to retrieve parts of the jet in the woodland near to Zemmer, a small town between Spangdahlem and Trier.

Immediately following the incident many roads were blocked off, aided by military police and the local fire service before officials from the US air base "took over," said the fire service.

There is no danger from the destroyed F-16.

The Air Force reports that a board of officers will investigate the cause of the accident.

At least 24 F-16 fighter jets and around 4,000 US troops are stationed at the Spangdahlem air base.

Commenting on the incident Chief Master Sgt. Christopher Ostrom said "We are happy that the pilot is okay."

Edgar Schmitt, the mayor of Zemmer expressed relief that the aircraft had not crashed in the town.

This is the second instance of an accident involving military planes in Germany in recent months. In June, two German military jets collided during a flying mission in the northeastern state of Mecklenburg-Western Pomerania.

One pilot escaped via the plane's ejection seat while the other was killed in the June crash.