Germany Under Fire for Carbon Pollution Give-Away | Germany | News and in-depth reporting from Berlin and beyond | DW | 29.06.2006

Environmentalists are blasting a government plan to grant greater carbon-pollution rights to German industry. The concession would gut efforts to combat climate change, they warn. 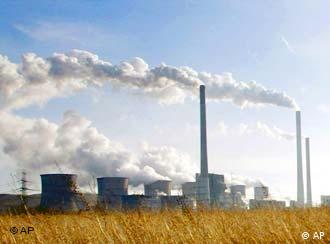 Environmentalists say the deal will hurt the Kyoto Protocol

German members of Greenpeace staged a protest outside Chancellor Angela Merkel's office, condemning a scheme to grant greater carbon-pollution rights to German industry as a multi-billion-euro gift "that will lead to a climate catastrophe."

The National Allocation Plan II, which received cabinet approval Wednesday and covers policy from 2008 to 2012, allows industry and electricity companies to emit 482 million tons of carbon dioxide (CO2) per year under the Kyoto Protocol's cap-and-trade system.

The scheme marks an increase over last year's level of 474 million tons, which the government had argued was unusually low and unfairly penalized German industry.

The allocation is worth more than 7 billion euros on the basis of a current market price of about 15 euros ($18.75) per ton of CO2 under the EU's Emissions Trading Scheme.

Pollution at a steep price

The plans have been criticized by ecologists, Germany's regional states and even industry groups.

"The federal government must not allow such amounts to be given away for nothing," Baden-Württemberg state environment minister Ernst Pfister told the Financial Times Deutschland.

Environmentalists want pollution to come at a steep price and are calling for the certificates to be auctioned off, which the European Commission -- the EU's executive -- allows for up to 10 percent of the rights under the ETS. 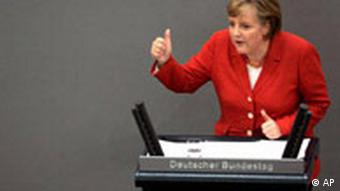 The ETS, one of the core mechanisms of the Kyoto Protocol on greenhouse gases, aims at reducing pollution by big industry.

Participants are set a quota of emissions and must pay a stiff financial penalty for every ton of CO2 that breaches this threshold.

Companies that are below their quota can sell surplus emissions rights to firms that are above their quota, thus providing a carrot to everyone to clean up their act.

But green groups say the market, which has been operating only since Jan. 1, 2005, could be wrecked if the quotas are not tight enough.

The price for CO2 was badly hit in April when several countries reported that their actual emissions in the first phase of the ETS operations had been way below their estimated emissions, thus leaving a lot of surplus CO2 on the market.

Recovery of the market has been based on expectations that countries will impose more stringent quotas for the period after 2008. 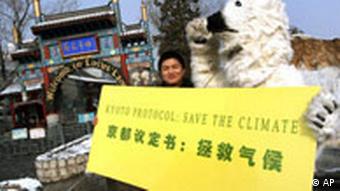 Greenpeace continues to work for the Kyoto protocol around the world

This explains the dismay among environmental groups at the decision made by the cabinet in Berlin this week.

Under the plan, energy companies and industry must cut their CO2 emissions by 15 million tons per year, marking a cut of about 3 percent compared to the average in 2000-2002, but green groups are angry that, compared with the 2005 level, it represents an increase.

Under the Kyoto Protocol, Germany pledged to cut greenhouse gas emissions by 21 percent from 1990 levels by the period 2008-2012.

Most of Europe, which has criticized the United States over its stance on global warming, looks set to miss a set of goals to cut greenhouse gases under the Kyoto Protocol, a new study shows. (Dec. 29, 2006)

It's been a year since the EU launched its first carbon trading market and things are looking up in spite of a recent plunge in prices, experts say. (May 12, 2006)

When the Environment Becomes a Business Concern

Many companies continiue to bypass environmental concerns in improving their bottom line. A UN climate conference in Montreal says the strategy is costly. (Dec. 6, 2005)