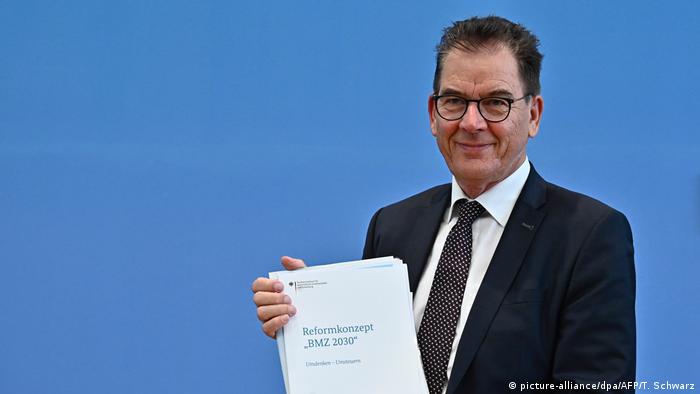 Germany's current list of 85 "partner" nations is too much and its annual aid expenditure of €10 billion ($10.9 billion) will now focus on just 60 nations, development aid minister Gerd Müller told DW.

"With money alone we cannot solve the problems of Africa and the developing countries," said Müller, adding that partners which met criteria would get more.

Those which remained "reform resistant" would lose German cooperation.

Outlining the concept "BMZ 2030" for his ministry known as the Federal Ministry for Cooperation, Müller said it planned four focuses: food security, health and family planning, education, energy and climate.

Vocational training — a German specialty — would account for 25% of Germany's aid budget spent abroad, he said.

Fragmented "piece-meal" projects would end and liaison via EU and multilateral entities would be sought, notably coordination with France and Britain to avoid duplications coupled with priority-setting to improve aid effectiveness.

And "global partners" such as China, Russia and Brazil had been identified in campaigns to safeguard biodiversity, oceans and climate.

Among reform-oriented nations listed by Berlin were Tunisia, Ghana and Ethiopia.

Sidelined would be Burundi for alleged poor governance and Myanmar over its mistreatment of minority Rohingyas.

Instead, they would receive aid via a waste-water clarification plant at a refugee camp in neighboring Bangladesh.

In reaction, Bernd Bornhorst, chairman of the umbrella network Venro, representing some 140 humanitarian groups in Germany, said civil society advocates in partner nations depended on political dialog and would be "weakened without the BMZ's own involvement."

The German parliament's opposition Free Democrats (FDP) accused Müller of "practically" driving states such as Nepal, Sri Lanka, Myanmar and Laos into the arms of China.

The German Protestant agency Brot für die Welt (Bread for the World) said church and other charities would not be able fill aid gaps left by BMZ pullbacks.

The Catholic Misereor agency said: "It is precisely problem states with fractured statehood, not just the "reform champions," that must remain on the agenda."

"The Corona crisis hits the poorest of the poor hardest.There is no intensive [hospital] care in Mali or Sudan if someone there has the corona virus," Müller told DW while accusing rich nations of encapsulating themselves into their shells.

Pandemic-induced school closures in poor nations had left 500 million children without their once-a-day meals they only got during tuition, he said.

The European Union, he said, should do more to assist "our neighboring regions in Africa and arc of crisis zones around Syria," calling on the EU to provide €50 billion in stabilization credits and emergency assistance.

However, Berlin has attached strict conditions to the additional funds for the UN. Germany's foreign minister said it was up to Turkey and Russia to fulfill the requirements. (05.03.2020)