Germany to arm Kurdish forces fighting Islamic State in Iraq | Germany | News and in-depth reporting from Berlin and beyond | DW | 31.08.2014

The German government has announced it will supply 70 million euros worth of high-end military equipment to Kurdish forces fighting Islamic State militants in Iraq. The move is a major shift in Germany's post-WWII ethos. 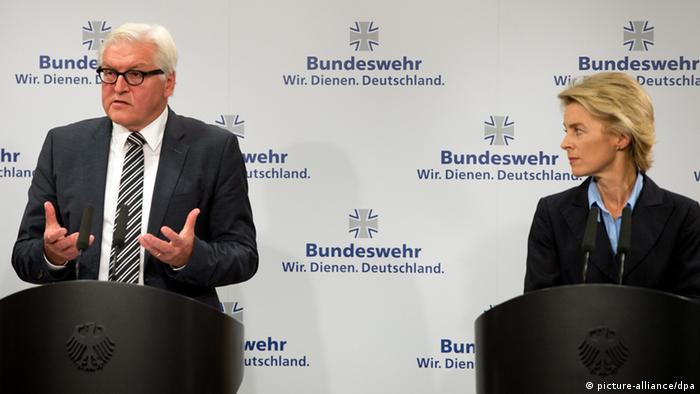 The German government announced on Sunday evening it would send anti-tank missiles and machine guns to Kurdish fighters battling Islamic State (IS) extremists in northern Iraq.

The German Defense Ministry said the arms, as well as protective gear and communications equipment, would be enough to supply 4,000 Kurdish Peshmerga fighters.

The delivery will take place over three shipments to start at the end of September. It will include 8,000 German-made G36 assault rifles and ammunition, 30 MILAN anti-tank systems, and five heavily armored Dingo infantry vehicles.

Berlin will also send 50 million euros ($65.6 million) in humanitarian aid to the region.

German Defense Minister Ursula von der Leyen (above right) made the announcement in Berlin alongside Foreign Minister Frank-Walter Steinmeier (above left), who said Germany must help in the fight against the Islamic State (IS).

"The situation in Iraq is extremely critical," von der Leyen said, accusing IS of "merciless brutality."

The IS has made significant territorial gains in recent months as part of a quest to establish a "caliphate" in northern Iraq and Syria. Chancellor Angela Merkel recently labeled the group's actions as "genocide."

The move breaks Germany's long-standing reluctance to join military operations overseas, in part due to the military aggression from the Nazis last century and the consequent deep sense of pacifism in the country.

"This is the most difficult decision that I have had to make in my career," said German Economics Minister Sigmar Gabriel, who is also the vice chancellor in Merkel's ruling coalition.

Merkel has repeatedly ruled out sending ground troops to Iraq.

Lawmakers in Germany's parliament, the Bundestag, are set to vote on the government's decision on Monday. Merkel's conservative Christian Democrat-led political bloc and its left-leaning Social Democrat (SPD) coalition partner, led by Gabriel, plan to back the move.