The reports involve "several dozen soldiers" from a battalion that carries out ceremonial duties. The troops are also being investigated for sexual abuse, the Defense Ministry said. 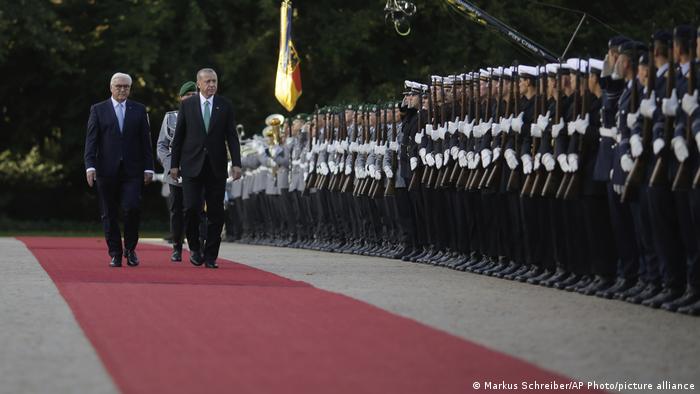 Germany is investigating a far-right extremist organization within the military's honor guard battalion, the Defense Ministry said on Friday.

The group reportedly refers to itself as the "wolf pack" (Wolfsrudel) and is also being scrutinized for its initiation rituals and sexual abuse.

The 2nd Company within the prestigious battalion, best known for welcoming foreign heads of state and for high-profile military processions or honors, has been "withdrawn" from active service while the reports are investigated, Defense Ministry spokesman Arne Collatz told reporters in Berlin. The officers implicated have been relieved of their duties.

Soldiers suspended after complaints within the unit

The incidents came to light as a result of accounts by fellow battalion members, it was first reported online by Der Spiegel, shortly before the ministry commented and briefed the parliament on Friday.

Collatz also acknowledged that these allegations were by no means the first of their kind within the German military ranks in recent years.

"It concerns — once again, you have to say — rather perverse drinking and hazing rituals. It concerns sexual violence and molestation. It concerns far-right incidents," Collatz said.

The leader of the faction, which is said to number six or more soldiers, is alleged to have racially abused troops.

The group of soldiers have been suspended from all official events "until further notice" while the investigation is conducted, Collatz said. The Defense Ministry said the allegations "bring deep shame on us," and that the case would be investigated "with all rigor."

Extremism problem within the military

According to Der Spiegel, a 32-year-old noncommissioned officer had been seen wearing a T-shirt showing a black sun with "Sonnenstudio 88" (Solarium 88) on the front and "We are brown" in German on the back.

The number 88 is supposed to correlate with HH ("Heil Hitler") as the eighth letter of the alphabet. The Nazi Party's initial paramilitary wing wore brown, and brown was the party's color in the Weimar Republic. Modern-day German laws prohibiting the display of famous Nazi era symbols or gestures, such as the swastika or the Nazi salute, force far-right extremists to use more oblique references to Hitler and the NSDAP or risk prosecution.

German officials have said they are determined to root out right-wing extremism within the military after a series of similar reports in recent years. On Friday the ministry stressed that "every case of suspicion is one too many," and that there would be "zero tolerance for any kinds of crimes."

In June 2020, the German Defense Ministry disbanded an elite wing of the armed forces in response to reports of far-right extremism within its ranks. About a year later, Defense Minister Annegret Kramp-Karrenbauer decided to dissolve only elements of the KSK special forces unit, after initially considering disbanding it altogether, saying efforts to reform it had already made good progress.

Correction: The original version of this article incorrectly referred to Wolfschanze as Adolf Hitler's secret bunker near Berlin. This reference was removed on October 11, 2021.

The nine suspects, six of whom are reservists in the German army, were between 37 and 53 years old. They face up to two years in prison if charged and convicted of forming an armed group.