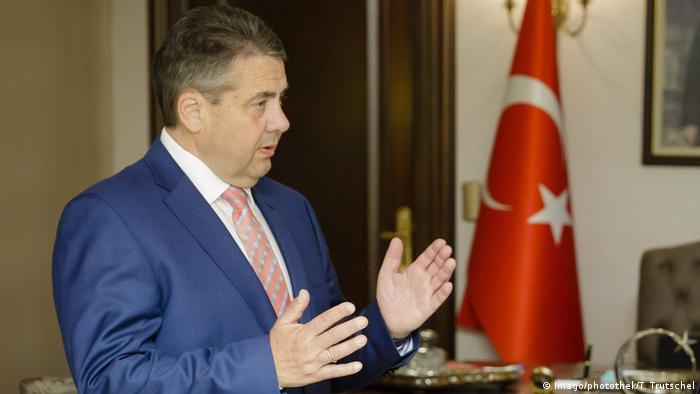 The German Foreign Ministry on Wednesday said it had summoned Turkey's ambassador in Berlin to protest the pre-trial detention of six human rights activists, particularly that of German citizen Peter Steudtner.

"The Turkish government needs to immediately and directly hear the German government's outrage and incomprehension as well as its crystal-clear expectations in the case of Peter Steudtner and, this time, without diplomatic niceties," Foreign Ministry spokesman Martin Schäfer said.

Schäfer said German Foreign Minister Sigmar Gabriel had interrupted his summer vacation to attend government consultations over the Turkish court's decision to jail Steudtner, a human rights trainer who was taken into custody earlier this month.

Steudtner was one of 10 people - including Amnesty's Turkey director Idil Eser - who were detained in a July 5 police raid on a hotel on the island of Buyukada, off Istanbul, while participating in a workshop on digital safety. Four detainees were released on Tuesday morning, while the other six were jailed pending trial. The six are accused of aiding an armed terror group. Under Turkey's anti-terror laws, pre-trial detention can last up to five years.

Spokesman Schäfer said the point had been clearly made to the ambassador that Germany considered the activists' arrests to have been both unacceptable and incomprehensible, and that Berlin wanted Steudtner released immediately.

"He now knows that we are serious about it," said Schäfer.

German Chancellor Angela Merkel on Tuesday condemned the decision to detain Steudtner ahead of his trial, saying it was "absolutely unjustified."

"We declare our solidarity with him and all the others arrested ... the German government will do all it can, on all levels, to secure his release," she said.

The Foreign Ministry had issued a separate statement calling for the rapid release of the six activists.

"Linking a fighter and spokesman for human rights and democracy like Peter Steudtner to supporters of terrorists is absurd," the statement said.

Merkel's main rival in Germany's upcoming parliamentary elections in September, Martin Schulz, said the foreign minister would "certainly assess which diplomatic steps will be necessary," adding that "the time for patience is over." Schulz also prompted Chancellor Merkel to "end her silence" on a series of issues that have rocked German-Turkish relations in the past 12 months.

Relations between Turkey and Germany, home to some three million people of Turkish origin, have nosedived since last year's failed coup attempt and the subsequent deterioration of the rule of law in the country under an official state of emergency. Thousands of arrests have been made and tens of thousands of public officials, including teachers and doctors, have been sacked from the jobs as part of an ongoing purge on dissident voices.

About 150 journalists all also among those who have been jailed since the July 15, 2016 failed coup, including one German-Turkish dual national, Die Welt reporter Deniz Yücel. Yücel was arrested in February and accused of spreading "terrorist propaganda" and "inciting hatred."