Germany steps up battle against piracy in Gulf of Aden | World | Breaking news and perspectives from around the globe | DW | 13.01.2010

The German Frigate Emden is on her way to Djibouti to join the European Atalanta mission in the Gulf of Aden. Deutsche Welle talked to Navy Press Officer Christoph Kohlmorgen at Operations Command Center near Berlin. 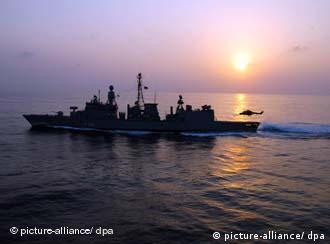 The German navy frigate, the Emden, is to provide safe passage for aid ships

Deutsche Welle: How has the Emden been prepared for her mission?

Christoph Kohlmorgen: The Emden will take over the job of the Bremen, which is momentarily the German participant in the European Union mission Atalanta. There are about 230 soldiers on board. A ship of the size of the Emden is more or less like a small city. There are all kinds of specialists amongst the crew, from machinery and navigation operators to helicopter mechanics and pilots. Of course there are several medical officers. In charge of arresting pirates are special boarding parties and soldiers from the military police.

What exactly is the job?

The main job is to give a safe way to the ships of the World Food Program from and to Somalia - the delivery of the food to the harbor of Mogadishu. Another responsibility is the protection of commercial vessels against pirates. But that comes second in the ranking.

Though pirates seem to be more interested in commercial ships.

It doesn't mean that we don't look after trade ships. On the contrary. We do all we can to make the journey of commercial vessels as safe as possible in this area. Every ship owner can register his passage through the Gulf of Aden on a European Union website. That way we can look after them. That website by the way also gives the crews advice on how to behave in the troubled region.

How successful has the German contribution to Atalanta been so far? 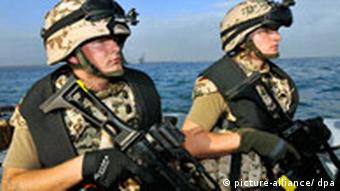 The Atalanta mission has been a mixed success so far

I think we have been successful. Not one single ship, which followed the EU instructions has been hijacked, though some were attacked. But following the EU advice allows the ships to gain time during an attack - enough time for Atalanta to send out helicopters and chase the pirates. All hijacked ships ignored the EU instructions or at least didn't follow them completely.

We are talking about a huge region several times the size of Germany and Atalanta has not more than seven Navy ships available at a time. How efficiently can you offer protection in the given circumstances?

Let's talk about the World Food Program first. One way of protection is what we call Vessel Protection Detachment. A dozen or so German soldiers stay on board the cargo ship between Mombasa and Mogadishu and our frigate escorts the ship. The helicopters make surveillance flights during the journey to make sure there are no pirates around. The problem is recognizing them, because they generally use fishing boats.

For commercial vessels it is important to follow the International Recommended Transit Corridor in the Gulf of Aden, which offers them what we call "the golden 20 minutes." When a ship is attacked by pirates, it needs to hold them off for 20 minutes, enough time for one of the Atalanta helicopters to arrive. Once the pirates see a helicopter they give up, because they know the frigate cannot be far away.

But how does one gain those 20 golden minutes? 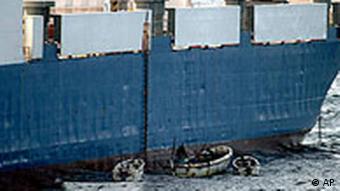 For example by sailing zigzag. That creates waves from the side, which are problematic to the pirate boats when they come close.

It all would sound even more wonderful if not a dozen ships and their crews were still in the hands of pirates. What must happen to stop piracy as a whole in the region?

The solution of the problem can only be found on land in Somalia. As long as the pirates have a safe haven in Somalia, where they can buy ships and fuel and all they need, without having to fear prosecution for the crimes they commit on the sea, the piracy problem won't be solved.

That means the Atalanta mission will have to continue as well? With German participation?

The German mandate ends in December. It is up to parliament to decide whether it is extended or not. That's a political decision.

The German cabinet has underscored its zero tolerance to piracy policy by agreeing to extend the mandate of its armed forces near the Horn of Africa. (09.12.2009)