Children from immigrant families are far more likely not to have any educational or professional qualifications than their German counterparts, according to a new government report. 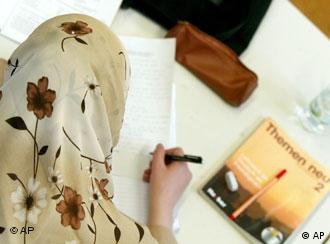 The government is proposing to improve language instruction for immigrants

Integration Minister Maria Böhmer described the statistics, based on data collected in 2005, as "dramatic." They show that only 23 percent of children of non-German origin embarked on an apprenticeship, compared to 57 percent of their native German counterparts.

Böhmer said the situation had worsened in comparison to the mid-1990s, when the figure was around 34 percent. She added that the continuation of the negative trend despite the recent economic upturn should be regarded as an "alarm signal."

Around one in five do not have any qualifications 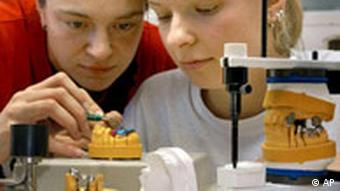 In Germany, it's difficult to get a job without having completed a traineeship

The report also revealed that some 17.5 percent of children of non-German origin finish school without any educational qualifications. The risk of becoming unemployed is twice as high among migrants -- a fact Böhmer blamed chiefly on this lack of education and training.

The integration minister said that rather than encouraging the migration of skilled workers into Europe to ease labor shortages, Germany must focus on improving integration and training for its existing migrant population.

"We cannot afford to lose any talent," she stressed. According to the statistics, some 15 million people in Germany have immigrated since 1950 or have at least one immigrant parent. About 50 percent of them have German citizenship.

"We must significantly improve the educational situation of young migrants," she said.

Böhmer pointed to a series of measures included in the national integration plan, such as early language coaching in kindergartens and schools, ease of access to study grants for migrant teenagers and improved teacher training. "We need more teachers from a migrant background," she added.

The national integration plan was agreed in the summer at an integration summit attended by immigrant organizations, charities, business associations and representatives from various levels of government. 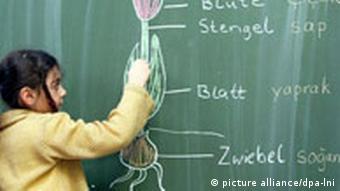 Some schools are teaching Turkish alongside German

Sevim Dagdelen, a member of the Left Party, sounded a note of warning. "German language skills are not enough to safeguard against discrimination in the education system and against unemployment."

In her speech presenting the report, Böhmer also said that there had to be improved acceptance of qualifications gained abroad. She said there were some half a million foreigners in Germany with degrees, but who unable to work in their professions because their credentials were not recognized. "We are squandering potential here," she criticized.

The integration minister had some good news. The number of immigrants setting up their own businesses has almost doubled since the 1990s. Currently, immigrants own some 582,000 firms and employ some two million staff.

In an interview with Deutsche Welle, Maria Böhmer, Germany's integration commissioner, talked about the issues that have spurred Turkish groups to boycott a key upcoming integration summit. (09.07.2007)

In multicultural urban areas of Germany, a new variant of German has evolved with its own grammar and rhythm. This ethnolect is spoken among young migrants of various ethnic backgrounds as well as young native Germans. (08.12.2007)

What do you think Germany needs to do to improve the situation of its immigrants? Send us an e-mail. Please include your name and country in your reply.