Worried that globalization will give German companies the incentive to sink wages, some politicians are getting loud about a minimum wage. Both business and some unions reject the idea. 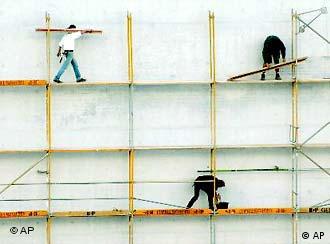 Construction is one of the few sectors with a minimum wage

An announcement by Germany's labor minister, Franz Müntefering, that he was ready to introduce a minimum wage bill to parliament later in the year has sparked heated debate in political Berlin.

Unions have rushed to call for a high wage, while business leaders slam the idea as another job-killing proposal by Germany's ruling coalition of conservatives (CDU/CSU) and Social Democrats (SPD). Unlike most European countries, including France, Great Britain and Spain, Germany doesn't have a minimum wage. Each industry sector negotiates wages separately through collective bargaining, but advocates say the government needs to step in to help those earning below-average wages.

"We can't continue to look on, when there are entire sectors where there are wages that don't provide a secure livelihood," said Matthias Platzeck (photo), the head of the Social Democrats, referring to nearly 2 million Germans who have full-time jobs, but nevertheless live below the poverty line. 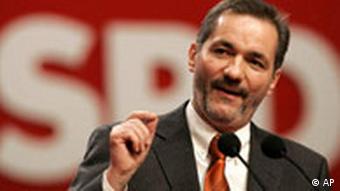 Six euros for some too little

At the moment, only the construction industry has minimum wages. Unqualified workers earn 7.15 euros ($8.53) and the scale goes up to 10.20 euros an hour. Exactly how much the minimum wage should be across different industry sectors is still up for debate.

Experts from the SPD and the CDU/CSU, which has warmed to the idea, have settled on 6 euros an hour, the first time they've named a figure in the months the minimum wage debate has taken. But some unions say they aren't willing to accept anything below 7.50 euros, which would give workers a monthly wage of 1,300 euros before taxes. Germans earn an average of 2,640 euros a month, according to 2004 statistics released this week.

"People should be able to live," said Franz-Josef Möllenberg, head of the union representing the hospitality industry.

An unlikely group of critics is against the concept, for different reasons. Hubertus Schmoldt, the head of IG BCE, which represents the chemical, mining and energy industry, said a minimum wage would mean the end of collective bargaining -- one the most powerful tools of Germany's unions. 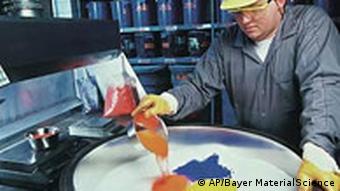 The union for Germany's chemicals industry is against the plan

"We don't know of any minimum wage or combined wage model that doesn't cost jobs, or where costs get out of control, or both," said Ludolf von Wartenberg, of the Federation of German Industries (BDI), in Berlin's Tagesspiegel daily.

Plants closures, lay-offs, outsourcing -- rarely was the news for the job market worse than in 2005. At the same time, it may just be an expression of the market's long-term restructuring. (Dec. 26, 2005)

The Pros and Cons of a Minimum Wage

Unlike other EU countries, Germany does not have a minimum wage. DW-WORLD talked to the head economist of Barclays Capital, Thorsten Polleit and General Secretary of the European Trade Union Confederation, John Monks. (April 12, 2005)

In view of the newly released unemployment figures, which showed a 0.2 percent drop in the adjusted jobless rate, the German government is optimistic about 2006. Economic pundits, however, would beg to differ. (Jan. 3, 2006)