The Pros and Cons of a Minimum Wage

Unlike other EU countries, Germany does not have a minimum wage. DW-WORLD talked to the head economist of Barclays Capital, Thorsten Polleit and General Secretary of the European Trade Union Confederation, John Monks. 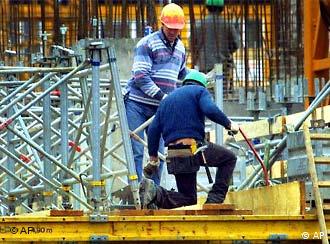 DW-WORLD. There is heated debate in both Germany and the European Union about the minimum wage. How worthwhile do you consider it to be?

Thorsten Polleit: When it comes to strengthening growth and employment across Europe, the minimum wage is definitely the wrong instrument. Wages in parts of the continent are too high and minimum wages would not help to create much needed jobs in the low-wage areas.

Many politicians consider legally-binding minimum wages as a means of fighting wage dumping through workers from Eastern Europe. How do you see that?

To refer to social dumping is to play with false morals. We know that it is the consumer and those workers who are refused entry to the labor market who suffer from reducing competition through a minimum wage. Cutting off the market would paralyze the most important sources of growth and employment. With this in mind, it is misleading to make reference to social dumping.

Germany is one of very few industrial nations which does not have a minimum wage. Even exemplary countries such as the US, Britain and the Netherlands have had a minimum wage for many years. Why would it be such a bad thing for Germany?

There are a number of countries which don't have a minimum wage, and it is important to take into consideration the fact that wages in Germany are already way above the average in other countries. A minimum wage would deepen the gap in wage discrepencies.

So would you say that the minimum wage kills jobs?

Minimum wages clearly prohibit the less productive workers from getting onto the labor market. This. in turn creates an increase in underemployment and the only way to solve that problem is with an open game of supply versus demand. A minimum wage wouldn't help the situation.

How would you suggest politicians go about creating more jobs?

We have to take into consideration that here in Europe, not only in Germany, we are in competition with many other nations such as India, China and other Asian nations. We also know that ultimately, affluence can only be created and maintained through the generation of better and cheaper solutions. We need less state intervention and more courage for reform, more courage for free market systems in Europe.

Click on the second part to read what John Monks thinks of a minimum wage.

DW-WORLD: There is heated debate in both Germany and the European Union about the minimum wage. Are you for or against it?

John Monks: We don't represent one stance or the other in the European Trade Union Confederation. We have respected the special situation in Germany and other northern countries in which wages are agreed by both employers and union representatives, rather than having a blanket minimum wage. I come from Britain, where we didn't have a minimum wage until 1998. But now that we do have one, I see its great advantages such as preventing employers from exploiting new workers and migrants.

Opponents to the minimum wage say rather than securing jobs in high-wage countries from the threat of cheap labor from eastern Europe, it shifts jobs into low wage countries. What is your opinion?

Again, I can only stress the British example. The level of the minimum wage is a very important factor. If you have a minimum wage of say, 15 euros ($19), there would be a great danger that low-wage jobs would move to other countries. There is a correct level and the British minimum wage is currently set at five pounds, which is just under eight euros, against a backdrop of falling unemployment. Some employers say it prompts employers to move jobs abroad, but all statistical evidence shows that if you find the right level for the minimum wage -- and I don't know what that would currently be in Germany -- it would not have a greatly negative impact on jobs.

Critics of the minimum wage say that minimum wage policies are nothing but protectionism against unwanted competition. What do you say to that?

I think there are all kinds of societies in western Europe which can be accused of protectionism. But I actually believe that minimum wages, at least in Britain -- and I think it is similar in France and Belgium -- can be advantageous for foreign workers. People who come from low-wage countries to those with normally much higher wages are extremely vulnerable --unless they are protected by a collective agreement or a powerful legal minimum wage machine. I think minimum wages help to protect inhabitants from industrial countries and I don't think it is protectionist. The effect is almost entirely beneficial.

What would you say to your German union friends if they were to ask for your advice?

I know my German union friends very well and they are able to form their own opinions on this subject without my advice. But I shared my experience with them when Britain shifted from a dismissive to a supportive attitude towards the minimum wage. We are on the board which dictates the level of the minimum wage. Maybe Germany can draw on some good advice if there is a decision to press ahead with a minimum wage. I would say that if and when the time comes, it would be crucial to involve the unions in the whole process.

Do minimum wages in different countries really make any sense in this globalized world of ours? Do we not at least need an EU-wide minimum wage for it to have any effect?

One last question: If you had to vote on whether or not Germany should have a minimum wage, how would you cast your ballot?

I'm not German and therefore I don't think I have the right to vote here. I have complete faith in the German people, the German unions and other institutions that they will make a good decision for Germany.

As demonstrators take to Germany's streets again on Monday to protest the government’s planned labor reforms, the SPD is trying to diffuse the discontent by rekindling a public debate on minimum wages. (Aug. 23, 2005)

The German Struggle with a Minimum Wage

Contrary to most other industrialised nations, Germany does not have a fixed minimum wage. The pro and contra camps are at loggerheads over the sense of introducing such a ruling. (April 12, 2005)

With the EU's eastward expansion and subsequent downward pressure on wages in Germany, opposition conservatives have stoked debate over the introduction of minimum wages, saying they're ready to support such a move. (April 09, 2005)