The German Struggle with a Minimum Wage | Business | Economy and finance news from a German perspective | DW | 12.04.2005

The German Struggle with a Minimum Wage

Contrary to most other industrialised nations, Germany does not have a fixed minimum wage. The pro and contra camps are at loggerheads over the sense of introducing such a ruling. 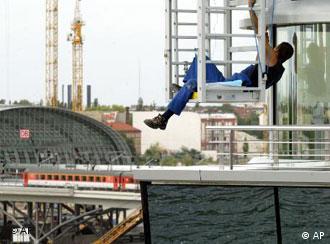 Do German workers need the protection of a minimum wage?

Tradition in Germany dictates that wage agreements are negotiated jointly by employers and unions. But in reality this tradition has been steadily crumbling over the past years.

In this age of a globalized economy, foreign workers who are willing and able to work for lower wages than their indigenous counterparts have been pushing their way onto the German market. Simultaneously there is increased pressure on companies to set up shop wherever production conditions are at their cheapest.

There might not be a legally binding minimum wage in Germany, but the construction sector is governed by a fairly strict ruling. Since 1997 the rules of German construction workers' contracts have also applied to employees of foreign companies working in Germany. 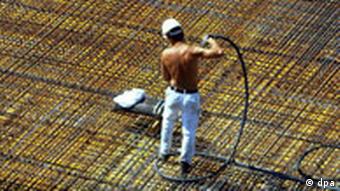 There is some protection for construction workers in Germany

The ruling came about in response to foreign companies using their own teams of cheap laborers, thus giving them an advantage over German companies, causing prices to tumble and local workers to be squeezed further out of the employment frame. In addition, working conditions for the foreign builders were not in keeping with Germany's social standards.

In the European Union, 18 of the 25 member states, including Greece, Spain, Great Britain and France have a minimum wage. It is more often referred to in terms of a minimum monthly wage than a per hour rate, and there is a massive descrepancies from one end of the spectrum to the other.

Last year's monthly rate for Latvia was 116 euros ($150) compared to 1369 euros in Luxembourg. Advocates for the introduction of a minimum wage in Germany argue from a platform of social justice and existential security. But opponents to the plans say they would be counterproductive as jobs which pay less than the minimum wage would be cut, and unemployment would be pushed up even further. The counter argument, however, is that the subsistence level in Germany is secured through social welfare benefits and unemployment payments.

With the EU's eastward expansion and subsequent downward pressure on wages in Germany, opposition conservatives have stoked debate over the introduction of minimum wages, saying they're ready to support such a move. (April 9, 2005)

When Fabian Löw unleashed jobdumping.de on the Internet, he had an inkling it would be provocative. Because at a time when job seekers have it tough, his job auctions are won by those willing to work for the least pay. (March 16, 2005)