The Ministry of Science, Research and Arts of Baden-Württemberg has handed over a heritage statue to the Indian ambassador in Berlin. The Durga idol had been stolen before being sold to a German museum. 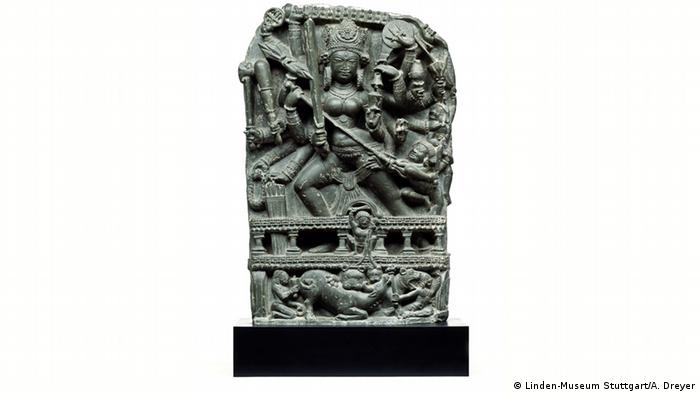 The federal state of Baden-Württemberg returned the statue called "Durga Mahishasuramardini" to the Republic of India "for ethical reasons", Arndt Oschmann from the Ministry of Science, Research and Arts said on Wednesday. Indian ambassador S. E. Vijay received the statue of the eight-armed goddess in Berlin.

According to Arndt Oschmann, the Linden State Museum for Ethnology in Stuttgart bought the statue in the year 2000, using funds from Baden-Württemberg's Museum Foundation. The stone idol cost $250,000 (about 224,00 euros).

"Back then, the Linden Museum examined where the statue came from, but there were no qualms about its origin. The seller, Subhash Kapoor from New York, was known as a reliable art dealer," ministry spokesman Oschmann explained.

More than a decade later, Kapoor was arrested at Frankfurt International Airport and extradited to India in July 2012 on charges of handling stolen artifacts from temples in southern India. "It turned out that the statue disappeared from a temple in Tengpona in India in the year 1991 and that it was smuggled out of the country eventually," Oschmann told DW.

The statue of the Hindu goddess Durga is estimated to date back to the 9th or 10th century, according to the Linden Museum.

Neither the museum nor the federal state of Baden-Württemberg will receive any financial compensation. However, returning the statue as a goodwill gesture strengthens the state's reputation, said Jürgen Walter, Secretary of State in the Ministry of Science, Research and Arts. "The importance of a good reputation exceeds by far the material value of the statue," he stated.

According to the "Daily Mail", the archeological agency "Archaeological Survey of India" (ASI) is concerned about 30 other antiques fraudulently smuggled out of India by Subhash Kapoor. These include 17th century manuscripts of the Sanskrit epic "Mahabharata", currently on display in Singapore's Asian Civilizations Museum.