A brawl among asylum seekers in a German town injured 15 after an Afghan tore pages from the Koran. Around 100 refugees took part in the riot at the shelter in Thüringen, which was previously criticized for overcrowding. 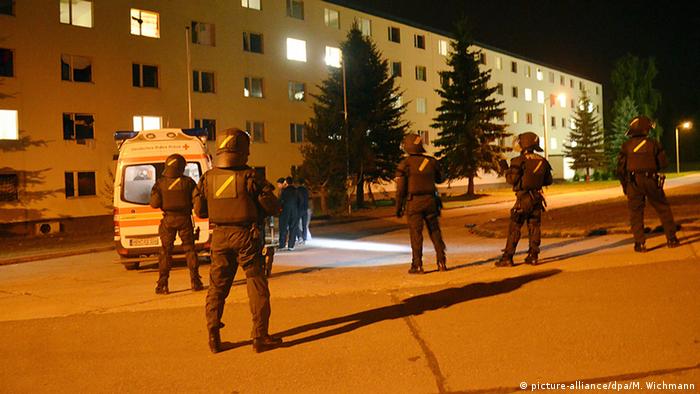 Four police officers and 11 asylum seekers were injured in a brawl in the town of Suhl in Thüringen Wednesday evening sparked by a dispute over the Koran.

An Afghan tore out pages from the Koran at a refugee shelter, prompting anger from 20 other residents, said a police spokesman Thursday.

The confrontation escalated into a riot involving some 100 refugees, with 125 police officers sent to the scene to break up the brawl, it was reported.

Police then came under attack from the refugees and were pelted with sticks and stones, with two officers so badly injured that they are currently unable to return to their duties, while seven police vehicles were damaged.

It took four hours to bring the situation under control. The Afghan was taken into police custody for his own safety.

Police are investigating charges of breach of the peace, assault and criminal damage.

The refugee home has already been criticized in the past. Jens Triebel, the mayor of Suhl, threatened to close the shelter at the beginning of August over the building's structural defects.

After the defects were fixed, the threat of closure was taken off the table, but overcrowding at the home remained an issue.

A lack of space was the trigger for another brawl at the shelter at the beginning of August, with refugees forced to sleep in the passageways.

The Refugee Council has called on the state government to build another shelter for asylum seekers.

Bodo Ramelow, state prime minister for Thüringen and a member of the Left party, told radio station Mitteldeutscher Rundfunk Info (MDR) that there should be separate refugee accommodation for different ethnic groups.

The police union (GdP) demanded an immediate crisis summit. In the face of the extremely tense situation in many refugee homes, effective measures must be taken, said deputy federal chairman of the GdP Jörg Radek Thursday in Berlin.

Overcrowded accommodation and lack of privacy have led to conflicts “over the smallest things,” which can quickly tip over into violence, said Radek.

Thüringen's Migration Minister Dieter Lauinger from the Green Party has announced that he will visit the shelter in Suhl on Thursday morning.

If you would like to add a comment, you can do so below. The thread will stay open for 24 hours.