The right-wing publication has falsely reported that Arab men set fire to Germany's oldest church while shouting "God is great." Dortmund police described the evening as "rather average to quiet." 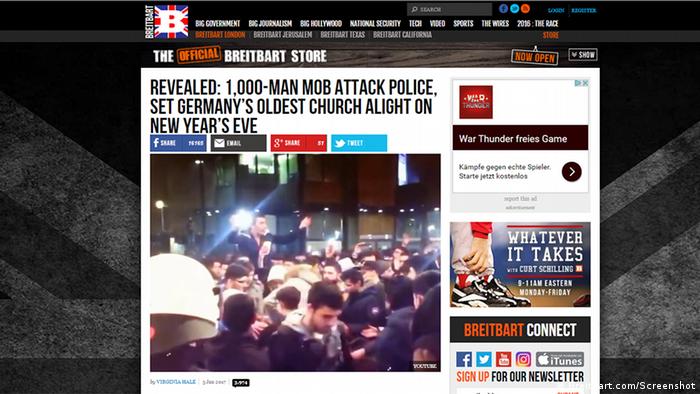 Telecommunications giant Deutsche Telekom and several other German firms have stopped advertising on the US media outlet Breitbart. A similar snub by Kellogg's had sparked a furious response from the right-wing site.

Germany on Friday reacted to an unsubstantiated news report published by American right-wing publication "Breitbart" that claimed a "mob" chanting "God is great" in Arabic had set fire to a Dortmund church on New Year's Eve.

However, local newspaper "Ruhr Nachrichten" said that parts of its reporting on New Year's Eve had been taken out of context and distorted to produce "fake news, hate and propaganda."

"Breitbart" reported that the men seen in a video posted by "Ruhr Nachrichten" reporter Peter Bandermann had amassed "around the flag of al-Qaeda and 'Islamic State' collaborators, the 'Free Syrian Army.'"

However, the flag seen in the video is widely used by various elements of the Syrian opposition, and dates to Syria's independence from French occupation.

In the tweet, Bandermann wrote that the Syrians had been celebrating an "armistice in their country."

Meanwhile, netting over scraffolding near a historic church in the city had witnessed a small fire due to wayward fireworks. Authorities said the fire had been put out within 12 minutes and did not damage the structure.

Police said the evening had passed "rather average to quiet," noting that the number of reported incidents fell sharply compared to last year.

Eva Kühne-Hörmann, justice minister of Hesse state, on Friday warned of the consequences disinformation could have in Germany.

"The danger is that these stories spread with incredible speed and take on lives of their own," she said.

The story published by "Breitbart" comes amid reports that the right-wing publication seeks to expand in Europe, specifically Germany and France, which are preparing for a momentous election year.

The publication's influence has expanded since its creation in 2007 after US President-elect Donald Trump nominated Steve Bannon, a former "Breitbart" editor, as his chief strategist.

Fake news: The power of lies