Germany's Economy Minister has outlined a range of government projects and funding. Berlin's aims are to boost access to venture capital for the country's startups and drive development of the Internet of Things. 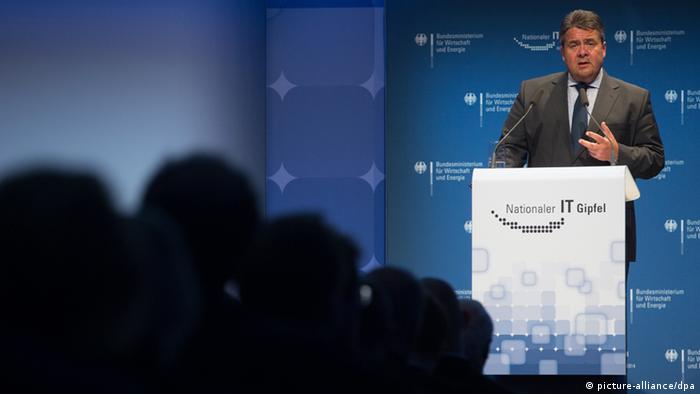 A new platform is needed at the Frankfurt Stock Exchange that caters to Internet startups, German Economy Minister Sigmar Gabriel said at a technology summit on Tuesday.

Speaking at the 8th Information Technology Summit in Hamburg, Gabriel said the exchange, known as Börse 2.0, would enable startups in urgent need of venture funding to access capital markets.

The German government is already in talks with the Frankfurt Stock Exchange operator, Deutsche Börse, he said, although he could not name a timeline for the platform's introduction.

No hindrance by Neuer Markt crash

Referring to the bursting of the dotcom bubble and the collapse of Germany's Neuer Markt - hailed as Europe's answer to the tech-heavy US Nasdaq - between 2000 and 2002, Gabriel said he would not let the new project be deterred by past snags.

During that crash, shares in two German technology share indexes saw 200 billion euros ($254.5 billion) of capital wiped out. Tech-sector stocks once worth hundreds of euros lost all of their value and became penny stocks.

Gabriel went on to suggest that lenders of venture capital should be allowed to carry expenditures forward for tax purposes. This would then be offset in the years when a business generates returns.

In Germany, there are sharp limits on writing off sums above 1 million euros. Gabriel has blamed that restriction for the country's general lack of venture capital for startups.

Industry 4.0 - The next industrial revolution

Industry 4.0 - The next industrial revolution

The Economy Ministry also intends to pump half a billion euros in public money into digitalizing the economy by 2017, Gabriel said. This would include the construction of four information centers to spread the word about the Internet of Things - a market in which appliances and electronic devices are connected online and can be controlled via mobile apps.

In what the German government is calling the Digital Agenda 2014-2017, 50 million euros will also go to supporting Internet-based services. Looking at the concept and operations of companies like Internet retailer Amazon, Gabriel said the same concept could also benefit engineering, electro-technical and automotive industry companies.