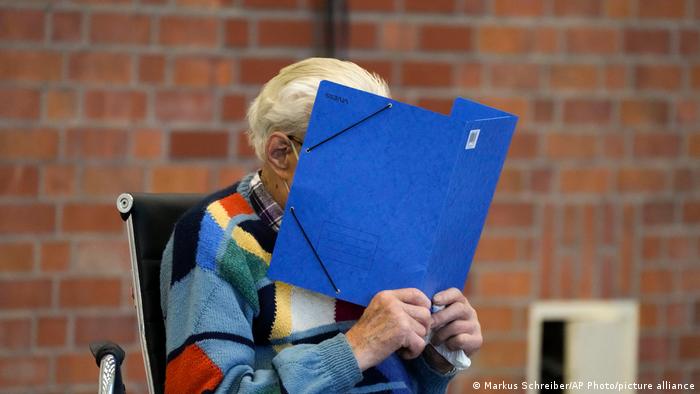 The man has pleaded innocent but is nonetheless the oldest person to be charged with complicity in war crimes during the Holocaust.

He is charged with involvement in the murders of 3,518 people at the Sachsenhausen concentration camp in the Berlin suburb of Oranienburg between 1942 and 1945.

Brandenburg state prosecutors, however, claim he "knowingly and willingly" participated in state-sponsored murder while working as a guard at Sachsenhausen. A court spokeswoman told the AFP news agency that the prosecution also believes that "the evidence put forward in the indictment has been fully confirmed."

Prosecutor Cyrill Klement said in court on Tuesday, addressing the accused: "You accepted the dehumanization of the victims and put up with that. I do not believe this 'we did not know anything' story."

Over 200,000 mostly Jewish people but also members of the Roma community, regime opponents and gay people were imprisoned at Sachsenhausen between 1936 and 1945 for no reason other than their religious and ethnic identity or political beliefs.

Tens of thousands died from forced labor or as the result of unethical medical experiments, hunger and disease, in addition to the acts of mass murder that took place there. Six million Jewish people were murdered during the Holocaust.

Soviet troops arrived first to liberate the camp in 1945.

What has the defendant said about allegations against him?

While under cross-examination, the 101-year-old said he did "absolutely nothing" at the Sachsenhausen concentration camp and denied knowledge of the vast crimes that took place there.

Allegations against him include participating in "execution by firing squad of Soviet prisoners of war in 1942" and the deployment of "poisonous gas Zyklon B" in the Sachsenhausen concentration camp's gas chambers.

Germany: Where the Holocaust was conceived

He has been on trial since October in Neuruppin state court. Hearings in the case have been held in the nearby eastern city of Brandenburg.

He has remained free for the duration of his trial. If convicted, it is highly unlikely he will be jailed given his age.

A verdict in his case is expected early next month.

Uptick in prosecutions since 2011 precedent

More than 75 years since the end of World War II in Germany, prosecutors are bringing the last possible cases against living Nazi perpetrators and war criminals to trial due to the advanced age of potential defendants.

The recent cases are the result of a 2011 precedent-setting case where it was deemed that indirect support of and participation in such crimes could also lead to a conviction, rather than having to demonstrate direct involvement in specific deaths or mistreatment, as was the case in the past.

In addition to the 2011 case against John Demjanjuk, German prosecutors have also brought to trial Oskar Gröning, an accountant at Auschwitz, and Reinhold Hanning, an SS guard at Auschwitz.

Gröning and Hanning were 94 years old when convicted, but died before spending any time behind bars.

In 2020, Bruno Dey was found guilty at the age of 93 and given a two-year suspended sentence.