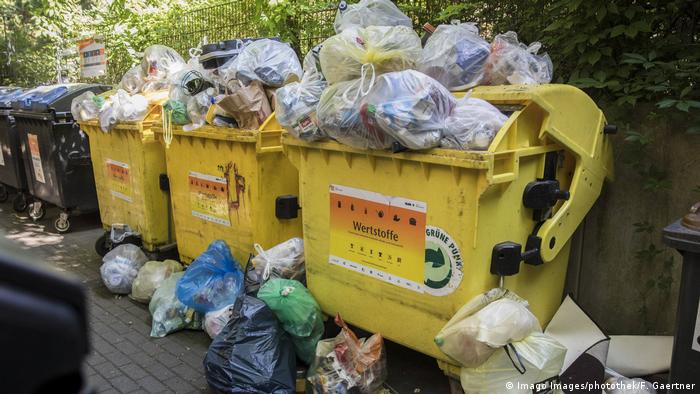 Germany amassed a record 18.7 million tons of packaging in 2017, according to new data published Monday by the Federal Environmental Agency (UBA).

That figure represents a 3% increase on the previous year and equates to 107 kilograms (236 pounds) per person in households.

However, it rises to 226 kilograms per capita overall when packaging waste was tallied before and during manufacturing and transport to retail outlets.

"We use far too much packaging, said UBA President Maria Krautzberger. "We must avoid waste; if possible, early in the production phase."

"Often one sees the contrary and even the toothpaste tube is packaged. We need lots more reusability, not only with [bottled] mineral water and beer," said Krautzberger.

"A coffee can also be purchased in a reusable mug. Whoever consumes takeaway food should also be able to do so in reusable containers," she urged.

Given Germany's 23% surge in packaging usage since 2000, the UBA president said switching to other materials was "usually not sufficient."

Germany's recycling quota at 70% was, however, described as "good" by her agency — referring to household and industrial-scale methods widely utilized across Germany to sort and separate waste into its original components.

Recycling glass, paper, and steel worked well but recovery of plastics and wood fibers, including those in laminates, at 50% and 26% respectively, were still problematic, said the UBA.

Aluminum recycling had a seemingly high quota at 87%, the UBA added, but in terms of pure aluminum recovered it lay only between 30% and 40%.

Germany's amended Packaging Law, effective from January 2019, sets out to improve recycling and reusability of materials and containers.

In early November, German Environment Minister Svenja Schulze got cabinet approval to gradually ban single-use plastic carrier bags in supermarkets and other outlets, urging shoppers instead to bring reusable bags with them.

The opposition Greens — at the time — said Schulze's initiative did not go far enough. Ultra-thin bags for fruit and vegetables are still permitted.

Monday also marked the start of the European Week of Waste Reduction.

From 2021, the EU plans to ban single-use cutlery, cotton buds, straws and stirrers as part of a drive to reduce plastic litter in the world's oceans.

Rising usage had multiple causes including packaging designed to be resealable or retail products in smaller portions for consumption on the go, according to the UBA.

Modern cloth nappies are a convenient alternative to disposables. But in trying to solve one environmental problem, are they contributing to another? Samantha Early aired her dirty laundry in public to find some answers. (11.11.2019)

How harmful are plastic bags to the climate?