Police officers in Frankfurt have been set upon by gangs while trying to disperse crowds that had gathered over the warm Easter weekend. Social distancing measures are in place to slow the spread of coronavirus. 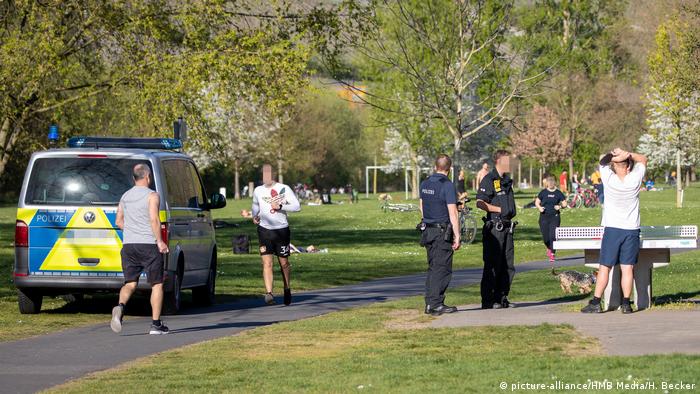 Police in Germany's financial capital, Frankfurt, were attacked by men with stones and iron bars while enforcing social distancing measures to slow the spread of coronavirus, authorities said on Saturday.

In a statement, police said officers stopped their car when they saw a large group of people in the street on Friday who were blatantly ignoring lockdown rules.

As one officer stepped out of the patrol car, one of the group threw a large stone at the vehicle. The group then ran away and the officers were unable to catch them.

Shortly afterward, a second officer was attacked by around 20 people as the officer got out of the vehicle.

"Some of the men were armed with stones, roof tiles and iron bars and were threatening the officers," the statement added. When the officers chased after the group, one person threw a five-kilogram metal plate, which missed its target.

After a longer search, including the use of a helicopter, police tracked down and arrested six suspects in an apartment in the city. They confiscated several weapons at the flat, including samurai swords and knives.

This is the first such incident reported in Germany, where residents have generally respected the strict regulations that have been put in place nationwide to slow the spread of coronavirus.

Good Friday was a public holiday in Germany and police were concerned that some people may take advantage of the unseasonably warm temperatures outside or meet with family and friends.

Police across Germany have issued fines to those flouting measures and have been patrolling public spaces. Lockdown measures are in place until at least April 19, and are expected to be extended.