In a search for the magic Eurovision formula, Germany reinvents the selection process yet again - and chooses a singer whom some are already calling "Germany's Adele." 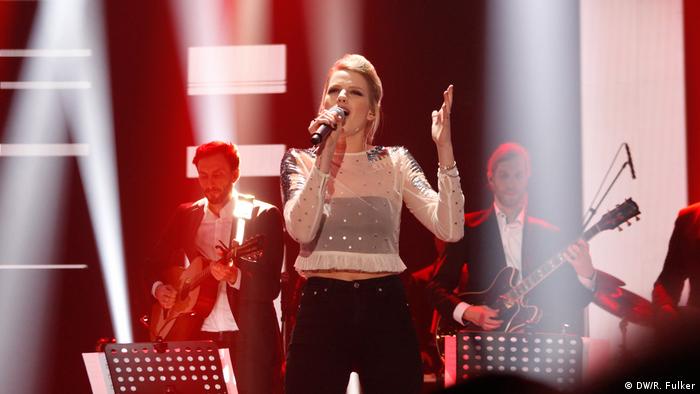 Is it about the best singer or the best song? That the Eurovision Song Contest is both became clear in the three-hour marathon of the German national final, televised live from Cologne on Thursday (09.02.2017).

From the beginning, the winner, Isabella Levina Lueen, was a clear favorite in a strong field of five contestants. Currently working on her master's degree in Music Management and Arts Development in London, she received her first formal vocal instruction at age nine and performed in children's musicals. This not being the first time Levina has won a competition, she frequently performs in clubs - and her maturity and experience were evident in all three of the songs she delivered during the course of the evening, equipping each with the fitting vocal style and shading.

With organizers hoping that Germany will rank at least in the Top Ten at the ESC finale on May 13 in Kyiv, an initial field of 2,000 applicants was narrowed down to 33 in January, then to five who competed on Thursday for the honor of representing the country. Those five contestants - Felicia Lu Kurbis, Yosefin Buohler, Helene Nissen, Axel Feige and Isabella Levina Lueen - first sang cover versions. In the first round of voting from the nationwide television audience, the field was narrowed down to three - Helene, Axel and Levina.

In the second round, all three sang a song specially written for the event, "Wildfire" by Norwegian composer Marit Larsen. After another round of voting, two - Axel and Levina - remained, and both then gave their renditions of a second newly-composed song, "Perfect Life" by American composer Lindy Robbins. In rounds three and four, the audience chose both the song and the singer.

Televised voting had been employed in the previous two years, with disastrous results: Germany placed last both in 2015 in Vienna and in 2016 in Stockholm. This time, the German national final was opened to a Europe-wide opinion poll, so that voters at home could see who ignited the most sparks across the continent. 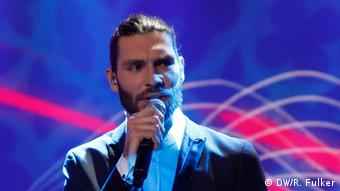 Whether or not Germans trust their own judgment in voting, the tactic seemed to reflect that two factors need consideration: personal taste and calculated chances of success. In effect, the European vote was equally split between Axel Feige and Isabella Levina Luen, but while Axel's performance grew stronger from round to round, Levina drew spontaneous applause and standing ovations throughout the evening.

It was a credit to Levina's poised delivery and nuanced soul voice. In the final round, she sang both songs, "Wildfire" and "Perfect Life" - and having selected its favorite artist, the public then had the opportunity to cast its vote for its favorite song as well. The event, after all, was titled "Our Song for Kyiv." Ultimately, the choice fell in favor of Levinia singing "Perfect Life."

The three hour show was spiced with performances by German singers Tim Bendzko and Matthias Schweighöfer. A moment both moving and hilarious was the triple performance by past ESC winners Nicole (1982), Ruslana (2004) and Conchita (2014) - the latter, who won the competition as a drag queen, now striking in male garb. 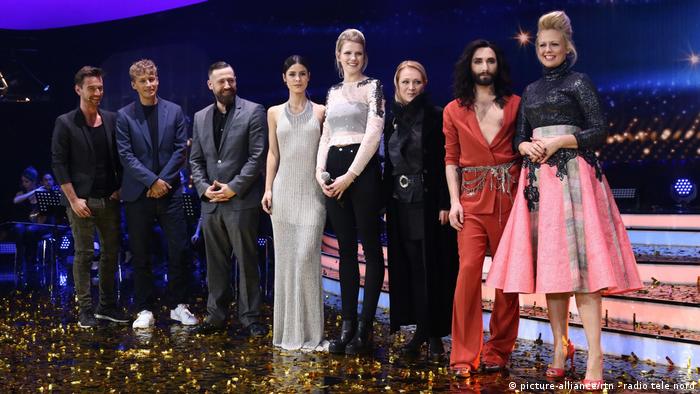 The formula for success?

All too serious calculation has often resulted in an excess of sameness in past years of the Eurovision Song Contest, and predictions are already being made for a surfeit of ballads in the current season after Ukraine won the 2016 round with a sweeping ballad. But the Eurovision audience of 200 million television viewers has often managed to confound expectations.

And then there were five: The German national ESC final

On February 9, a television audience will decide who will represent Germany at the Eurovision Song Contest on May 13 in Kyiv. (06.01.2017)