Germany Not Ready for Online Elections | Germany| News and in-depth reporting from Berlin and beyond | DW | 19.09.2005

The idea of holding parliamentary elections online has been discussed in Germany for several years. The conclusion for the moment is that it would be too risky. 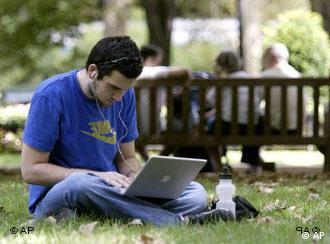 Renowned for technological innovation and scientific progress, Germany is downright conservative when it comes to voting technology.

Most of the country's 61.9 million registered voters cast their ballots on Sunday using the traditional method: Voters check the box of their preferred party and candidate on paper ballots, which clerks later tally by hand, as they have since Germany elected its first postwar parliament in August 1949.

Though the use of electronic voting machines is on the rise -- nearly 5 percent of voters used the devices in 2005, a 50 percent increase from 2002 -- the day when Germans vote per mouse click from their computer of choice is far from imminent. They could take an example from new EU member Estonia.

The Baltic country is the most wired of all EU nations. In August 2000, it became the first country to introduce an electronic documentation system allowing for cabinet meetings to be held online.

Estonian citizens can read the speeches of their representatives, view bills and resolutions, and even offer their own proposals for laws in a sort of e-direct democracy -- all online. The Baltic country of 1.3 million people is now leading the way to online "e-elections."

Estonia is set to become the first country to offer its citizens the convenience and -- according to their national election committee -- security of online voting, the result of years of effort involving legislative and technological innovations. 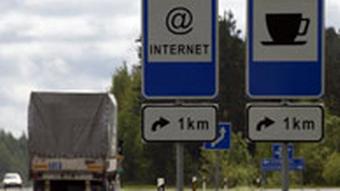 To take part in online voting, registered voter require an electronic ID card, a card-reading device and the means to go online. In a country where 68 percent of the population connects to the Net from home and traffic signs point to the nearest public Internet access, the latter prerequisite presents no great obstacle.

The Estonian government issue electronic ID cards to 800,000 citizens -- nearly the entire electorate -- in time for them to vote online in local council elections on Oct. 16.

In Germany, when it comes to voting technology, less is often seen as more. The extensive legal framework that determines the rules for elections dictates that a central agency, the PTB, based in Berlin, control the technical viability and security of voting machines. 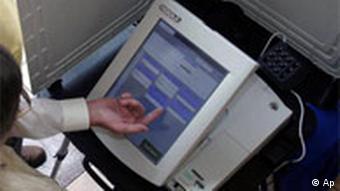 Thus far, the PTB has only approved a single -- Dutch -- electronic voting machine for use in German elections. Saying that the level of security was inadequate, the agency rejected machines from Diebold Election Systems, an American company whose devices counted most of the votes in the 2004 US presidential election.

Part of the problem with the so-called "black box" voting machines manufactured by Diebold was their use of closed-source software, including Microsoft Windows. Any manipulation or fraud involving this software would be undetectable by the public at large. The PTB does not accept any voting technology with closed-source coding.

The agency also doesn't expect a change in Germany any time soon. "You won't need to worry about that for quite some time," said a PTB official about the likelihood of Germany voting online. "The entire election laws would have to be amended. It would take at least 10-15 years," he added.

Dieter Richter, head of metrological information technology at the PTB, agreed that Internet elections would be long in coming, at least for parliamentary elections. His office has been involved in a research project, in cooperation with the Interior Ministry, on the technical viability of online voting. 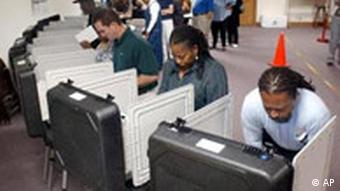 Many types of voting machines are used in the US

The project, which has been underway for several years, determined in 2003 that online parliamentary elections were, for the time being at least, a technical impossibility. Richter said that the discussion had continued, but focused on shareholder or workers council votes, which are also governed by law.

The motivation for online elections

Ensuring privacy, identifying registered voters and guaranteeing access to computers are all major hurdles that must be overcome before online elections could take place, pointed out Heinz-Christoph Herbertz of the Federal Election Commissioner's office. Even in the best possible scenario, voting via the Internet would never be able to completely replace traditional polling stations. 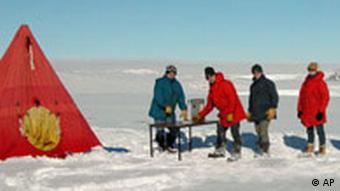 Online voting would make the most sense for Germans abroad, Herbertz said. He recently received a call from a German at a research base in Antarctica who wanted to vote by absentee ballot. But, Herbertz couldn't do anything to help. For lack of a post office on the icy continent, the man could neither receive nor send off a ballot. He would certainly be one of the first to benefit if ever online voting comes to Germany.

Linking up the Town Hall

Germany is ranked 10th in the EU in the digitalization of administrative and public services for citizens online. That should change in the next few years with new software for e-government. (March 20, 2002)

Several million Germans will be using machines to cast their votes on Sept. 18. But many still eye the method with suspicion. So far, only one company has managed to comply with Germany's stringent rules. (Sept. 7, 2005)

Voting in the US election was mostly fair, but lines were too long at some polling stations, observers from the Organization for Security and Cooperation in Europe reported. (Nov. 6, 2004)