Voting in the US election was mostly fair, but lines were too long at some polling stations, observers from the Organization for Security and Cooperation in Europe reported. 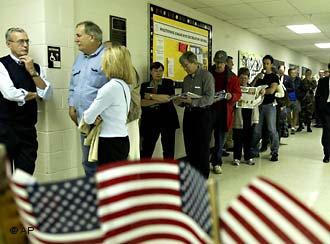 The OSCE criticized the long wait to cast ballots in Ohio

The OSCE, of which the US is a member, deployed 92
observers from 34 countries, including 56 parliamentarians, on a mission that particularly watched the implementation of a US election reform law passed by the US Congress in 2002.

"The elections mostly met OSCE's commitments for democratic elections, agreed to by the 55 OSCE participating states," the OSCE said in a statement two days after the US election, which gave President George W. Bush a second four-year term.

"Although it was not possible for our observers to access
polling stations in all states, due to lack of provision in federal or state legislation, it appears that the voting and the processing of ballots proceeded in an orderly manner," said Barbara Häring, vice president of the OSCE Parliamentary Assembly.

The problems spotted by OSCE observers during the Nov. 2 election were not serious enough to call the result into question. However, the organization noted that in the key state of Ohio, voters frequently faced a wait of two to three hours to cast their vote.

"Significant delays at the polling station are likely to deter some voters and may restrict the right to vote. While a solution to this problem may have cost implications, it is clearly desireable that steps are taken to reduce delays in future elections," said the OSCE's preliminary report.

The newly implemented voting computers with touch screen technology were a source of much concern before the election, though they appear to have passed OSCE muster. There were only "occasional" failures, the organization said.

But several individual observers were more critical in their personal remarks. Polish observer Konrad Olszewski told the International Herald Tribune that the e-voting system in Venezuela was better protected against failures and errors than the computers used in Florida.

"To be honest, monitoring elections in Serbia a few months ago was much simpler," he added. Serbia uses a unified voting system with paper ballots, which Olszewski said he prefers over all other systems. 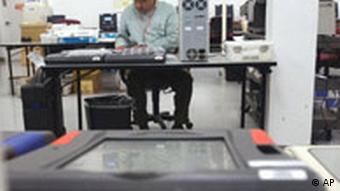 Some OSCE observers said Venezuela has better voting computers than those in Florida, pictured here

His Canadian team partner, Ron Gould, also said he thought Venezuela's e-voting system was more fraud-proof than the touch screens used in Florida. "Each electronic vote in Venezuela also produces a ticket that voters then drop into a ballot box," Gould told the IHT. "Unlike fully electronic systems, this gives a backup that can be used to counter claims of massive fraud."

Voting reform a "work in progress"

After a five-week delay in counting votes after the 2000 US
election, the Help America Vote Act (HAVA) was passed to correct voting errors that led to a bitter court battle.

"The impact of the HAVA reforms was positive but limited due to delays in its implementation and varying interpretation of parts of it," said Rita Süssmuth, head of the OSCE's long-term election observation mission. "It is a work in progress."

The OSCE's statement did not address a complaint made during Tuesday's election by a Danish observer who told Danish news agency Ritzau that he had been denied access to some polling stations in Columbus, Ohio.´

In the statement, the OSCE said its observers were granted access to polling stations in several states, "sometimes only in specific counties."

"The OSCE believes that in order to further enhance transparency and to meet its US international commitments, Congress and individual states should consider introducing legal provisions allowing unimpeded access for international observers invited by the US government," the statement said.

On Thursday, short-term observers from the OSCE arrive in the United States. For the first time ever, a foreign organization will be officially monitoring a US presidential vote. (Oct. 28, 2004)