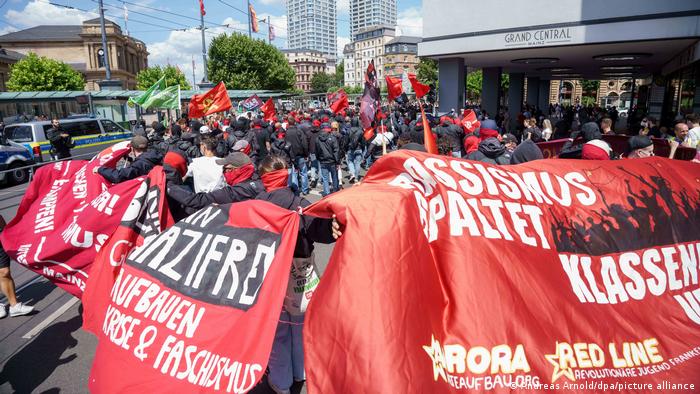 Anti-racism groups and political parties on Saturday broke up a planned gathering of a German neo-Nazi group.

According to police, about 3,000 people — made up of church groups, labor unions and antiglobalization activists — helped to push back the extreme-right march through the western city of Mainz.

About 50 members of the hard-right New Strong Party (NSP) had gathered for a protest, around half of the number the party said would show up.

NSP members shouted such slogans as "Nazi city Mainz" and "Revolution now" before being prevented from moving forward, police said.

Clashes then erupted between officers and NSP members, and police said they responded with pepper spray.

The neo-Nazi group then relocated to another part of the city, according to the EPD news agency.

Local media reported other scuffles between police and the counterprotesters.

Earlier Saturday, Mainz Mayor Michael Ebling led a gathering of some counterprotesters at the city's main railway station and used a speech to denounce the planned Nazi meeting.

"They should take their brown backpacks, pack them up and start their journeys back home," Ebling said.

He also warned against underestimating the danger from the extreme right.

The Interior Ministry of the German state of Rhineland-Palatinate said the group was "obviously neo-Nazi."

Authorities clamp down on Neo-Nazi groups

In April, German police raided around 50 premises in a nationwide crackdown on banned neo-Nazi groups.

In February, members of neo-Nazi groups marred the remembrance ceremony of the World War II bombing of the city of Dresden.

The participants of the far-right march walked into the city center to the sound of Richard Wagner's music.

Classified as a hate group by civil rights organizations and with members with convictions for violent crimes, the Proud Boys white supremacist group was pulled into the spotlight during the US presidential debate.