Dresden marked 77 years since up to 25,000 people lost their lives in a bombardment during World War II. Meanwhile, in the city center, hundreds of neo-Nazis gathered to the sound of Wagner to "honor" Dresden's war dead. Senior officials and representatives of the German War Graves Commission gathered on Sunday to commemorate the victims of the Allied bombing raids on the city of Dresden.

According to police, Sunday's ceremony at the Heide cemetery, where most of the dead from the air raids are buried, passed by without problems, but near Dresden's Old Town, hundreds of neo-Nazis came together for a "commemoration in honor of the Dresden war dead."

Dresden Mayor Dirk Hilbert and representatives of the state of Saxony, of which the baroque city is the capital, remembered the dead in a traditional ceremony at the cemetery, which is located in the northeast of the inner city.

"With regard to the destruction of Dresden, we must not only look at 1945, but must broaden our perspective to the time between 1933 and 1945," Hilbert said in his address.

"In remembering, we must face up to the complexity of a simultaneously divisive and unifying history, an infinitely complex one, precisely because of the current political situation in our city, in our country and in Europe."

Among those in attendance were Vice President of the State Parliament Andrea Dombois, Minister for Culture and Tourism in Saxony Barbara Klepsch and the state's Education Minister Christian Piwarz.

Neo-Nazis gather to the sound of Wagner

Just over the river and less than 3 kilometers from the commemoration, around 750 neo-Nazis gathered on Sunday morning, holding banners to "remember Dresden's war dead."

The participants of the procession proceeded to walk into the city center to the sound of Richard Wagner's music.

At the Zwinger Palace, hundreds of counter-protesters loudly opposed the far-right "silent march," which was accompanied by shouts of "Nazis out."

A helicopter hovered over Dresden's Old Town, while a water cannon and an evacuation tank remained on standby.

During another demonstration in Dresden on Sunday, two journalists were attacked by a group of protesters who were demonstrating against coronavirus restrictions.

In a statement, police "several participants in the protest" attacked the journalists and their companions. The journalists used pepper spray on the attackers before police intervened. 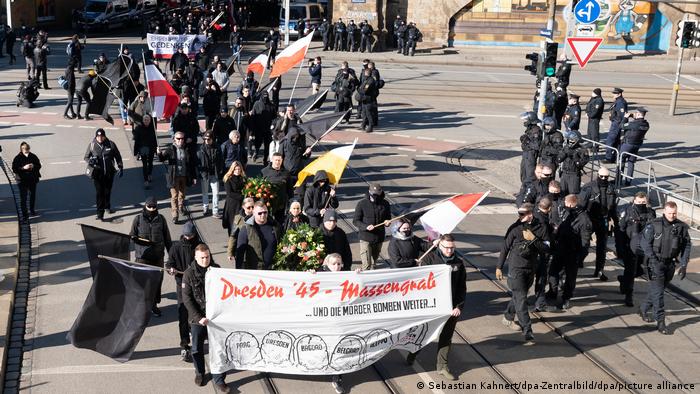 The neo-Nazis declared the procession a silent march, but several counter-demonstrations aimed to disrupt their intentions

Several events were staged in Dresden on Sunday to mark 77 years since the city was destroyed by Allied bombing and the ensuing fire that tore through the city, destroying its famous Frauenkirche.

With commemoration events scaled-down due to the coronavirus pandemic in 2021, this year's occasion resumed with more people in attendance, most visibly with a traditional human chain — a sign for peace and reconciliation.

A renewed appropriation of the anniversary by right-wing extremists has been ongoing over the past few years.

The extremists have used the moment to accuse the Allies of committing a war crime and to argue that Germans also suffered during the war.

Dresden was decimated by the series of four air raids over a two-day period, during which British and US air forces dropped more than 3,900 tons of explosives.

The heavy use of various incendiary bombs led to a firestorm in the city, a phenomenon more typically seen in nature when a fire becomes so large it creates and sustains its own wind systems, sucking in more oxygen and facilitating its own spread.