An intersex person has won a court case to allow them to enter a third gender into the registry of births. The case was appealed to the Federal Constitutional Court after failing at lower levels. 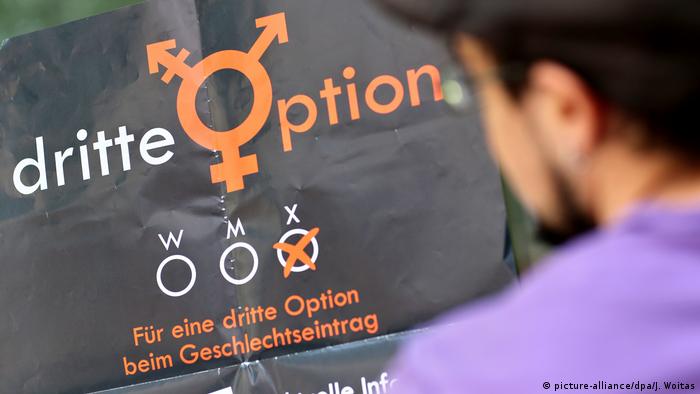 The poster reads: 'Third Option - In favor of a third option in gender registration'

Germany's Federal Constitutional Court on Wednesday called for a third gender option in the registry of births.

Intersex people, who are neither male nor female, should be able to register their sexual identity as such, the Karlsruhe court ruled.

The court found that the general right to the protection of personality in Germany's Basic Law meant the register had to be altered to allow a third gender.

The court ruled seven to one that lawmakers must create new legislation by the end of 2018 to allow for a third sex, providing the examples of "intersex," "diverse" or another "positive designation of sex."  Another possibility raised was to scrap gender entries altogether.

"Assignment to a gender is of paramount importance for individual identity; it typically plays a key role both in the self-image of a person and in the way in which the person concerned is perceived by others. The gender identity of those persons who are neither male nor female is protected," the court ruled.

The case was brought forward by an intersex person who had applied to change their gender to "inter" or "various" in the registry of births, in which they were registered as a girl. Chromosome analysis found they were neither male nor female. The case had failed at several other levels of the justice system, most recently at the Federal Court of Justice.

An estimated 80,000 people in Germany identify as intersex, meaning they don't display the gender traits of people generally described as "male" or "female." Some intersex people have both testicles and ovaries; others do not produce the hormones that determine the common binary gender characteristics.

Advocacy group Dritte Option (Third Option) wrote on Twitter that it was "completely overwhelmed and speechless," adding "this borders on a small revolution."

The Association for Intersexual People told AFP news agency it welcomed the decision saying it hoped for "further steps in the same direction."

The Central Committee of German Catholics and the Federal Association of German Registrars were against the idea.

Federal Minister of Family Affairs Katarina Barley welcomed the decision and called on the new government to attend to the issue as soon as it forms a coalition government.

"The new government must take immediate action to ensure that the Federal Constitutional Court's requirements are implemented," Barley said, addressing the parties likely to form the government. "I expressly plead for a comprehensive reform of the law for trans- and intersexuals in accordance with the Council of Europe's guidelines."

The Federal Ministry of the Interior announced that it would respect and implement the ruling. The Federal Anti-Discrimination Office praised the decision of the court as "historical" and called for a comprehensive reform of the civil registry law.

Until lawmakers fulfill the court ruling, courts and administrative authorities may no longer enforce the unconstitutional rules, the court ruled.