Germany has reported a new daily record of coronavirus infections as the total number passes 10 million. The country's justice minister says restrictions may still be loosened in March — but warning voices remain. 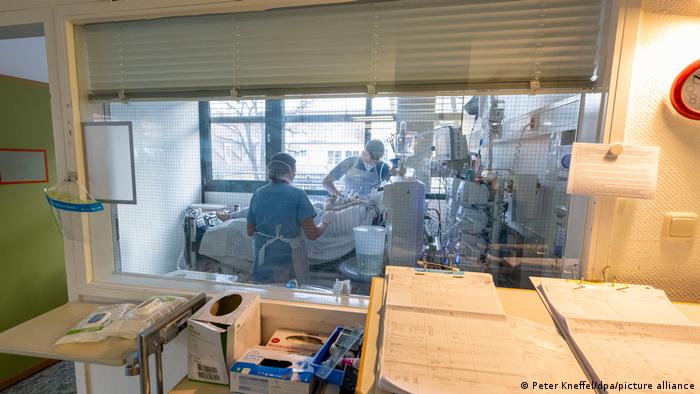 Germany is seeking ways to lift COVID restrictions, but many feel it is too soon

Germany on Wednesday registered 208,498 new coronavirus infections within 24 hours, a record high since the COVID pandemic began some two years ago.

Experts say that the real number of infections could be considerably higher, with many cases going unreported partly owing to shortfalls in testing capacity in many places. A number of cities and districts have also been reporting difficulties in passing on statistics to the public health agency, the Robert Koch Institute (RKI), in the past few days.

Another milestone was reached on Wednesday, with the total number of reported infections since the pandemic began passing the 10 million mark. Altogether 10,186,644 infections were reported.

Despite the rise in infections, however, death and hospitalization rates remain relatively stable. The RKI reported 196 deaths on Wednesday, compared with 166 a week ago, while the seven-day rate of people hospitalized with a COVID infection was put at 4.59 per 100,000 per week on Tuesday (Monday's rate was 4.64).

In view of this stability, more voices are being raised calling for concrete plans to exit restrictions.

Justice Minister Marco Buschmann has suggested that many measures to curb the spread of COVID-19 could be lifted in March if case numbers sank from mid-February as predicted by the RKI.

In an interview with the daily Rheinische Post, Buschmann said that such relaxations of restrictions would come only if "we are not suddenly faced with new variants of the virus that completely change the situation again."

He said the current rule in some German states at shops deemed nonessential that customers need to produce proof that they are vaccinated or have recently recovered from an infection to gain entry — the so-called 2G rule — could one of those to be reassessed.

"If a measure is not suitable or necessary, it must be dropped," he said.

Buschmann's remarks come two weeks before Chancellor Olaf Scholz and the leaders of the 16 German states are to meet to discuss pandemic strategies on February 16. At the last such meeting on January 24, it was decided that plans for exiting the restrictions should be when it is certain that Germany's health care system would not be overwhelmed.

WHO: 'We can end the acute phase of the pandemic this year'

There are, however, a number of voices warning against dropping coronavirus restrictions in the near future.

Speaking to the same newspaper, the head of the German Hospital Association (DKG), Gerald Gass, said that although it was right to discuss looser restrictions, they should come only when the peak of the omicron wave has passed and it was clear that hospitals were not overstretched. "It looks good at the moment," he said.

Leading virologist Christian Drosten from Berlin's Charite hospital also said that it was too soon to give an all-clear signal in Germany, largely because of the relatively low vaccination rate in the country.

In his regular podcast on issues related to the pandemic, Drosten said on Tuesday that the "ideal immunization" was with three doses of vaccine, which, he said, would allow people to become infected one or more times without suffering severe illness. 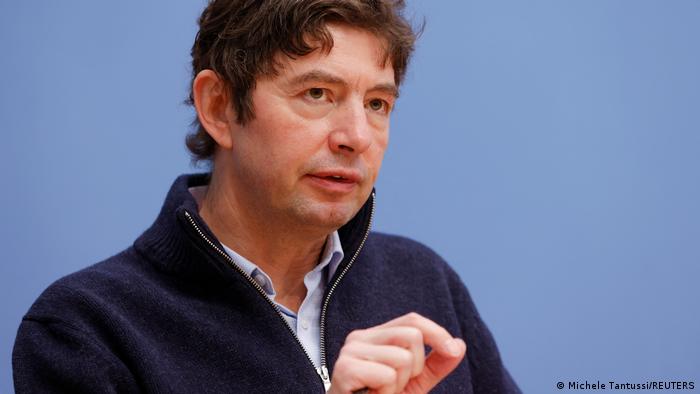 Those who have been through this would then be immune for years and not suffer reinfection, he said. He warned that unvaccinated people who are infected by one of the omicron variants would not generate the same kind of reliable immunity.

Drosten also voiced the opinion that the Easter holidays could be decisive in braking the pandemic, as schools are centers of infection.

The incidence among 5-14-year-olds is currently almost three times higher than the reported national average, while for the over 60s and over 80s it is more than three times lower.

The discussion on relaxing curbs in Germany has gained momentum following neighboring Denmark's decision to drop restrictions. But Drosten said the two countries could not be properly compared, as Denmark has a far higher vaccination rate than Germany.

Why it's so difficult to compare COVID-19 statistics

Denmark's COVID cases are soaring, while Germany occupies the middle ground, but do statistics really give an accurate picture? International test strategies vary widely — as can be seen now in Vienna, Austria.

Omicron should not be underestimated – WHO