With German forests in crisis, the agriculture minister has urged a rescue effort that could cost up to €800 million to complete. Authorities are struggling against invasive insects, chronic drought and forest fires. 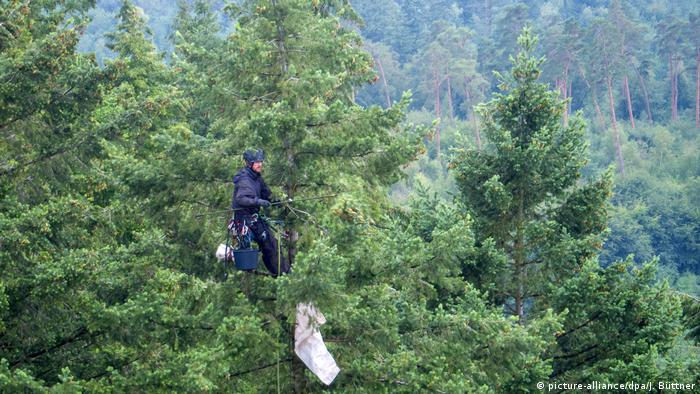 Germany must revitalize its forests in order to fight climate change, Agriculture Minister Julia Klöckner told public broadcaster SWR ahead of the National Forest Summit, which started on Wednesday.

"Every missing tree is a missing comrade-in-arms against climate change," Klöckner said. "Whatever we don't reforest today, our grandchildren will, of course, miss."

Klöckner's ministry invited over 170 organizations and institutions to the summit, where the minister would present her proposal to aid jeopardized forest areas. Long-running chronic drought and sudden storms, forest fires and aggressively spreading bark beetles are affecting around 180,000 hectares (some 444,790 acres) of forests according to the latest data. However, the BDF association of forestry workers said believes it might reach 250,000 hectares by the end of the year, which is the surface area equivalent to Germany's state of Saarland. Read more: Germany's forest are on the verge of collapse

Millions 'out of a watering can'

The BDF has previously urged planting a billion new trees in Germany within in the next decade. On Wednesday, Klöckner said the program needed to bring about at least as many trees as were lost in recent years. The kind of trees planted would vary from region to region, according to the local climate.

However, other politicians criticized the initiative as too vague.

"I don't want us pouring out millions like out of a watering can," Environmental Minister Svenja Schulze told the Funke Media Group of regional newspapers. She called for changes in Germany's forestry laws and specific investment targets.

The state environmental minister in Mecklenburg-Western Pomerania, Till Backhaus, also criticized Klöckner for simply wanting to discuss her own proposal instead of urging exchange with other decision-makers, such as state governments.

IG Bau, a union that includes forest workers, urged hiring of another 11,000 employees to facilitate the reforestation effort.