Germany mulls a real, but unrealistic, pledge on defense spending

Years after it pledged to spend billions more on defense, new pressure from the US is forcing the German government to consider whether it can actually meet its goal. 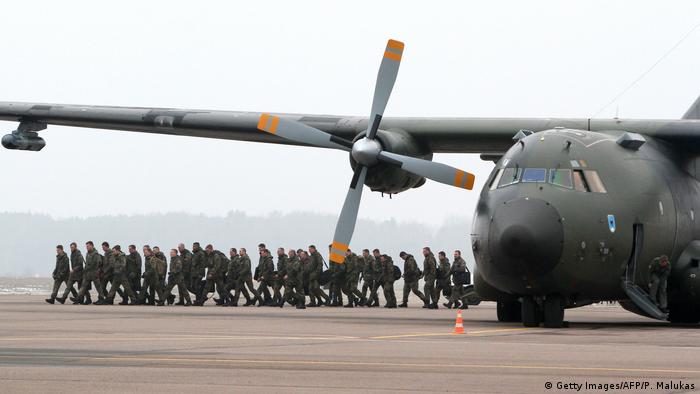 German soldiers arriving in Lithuania on February 1, 2017, as part of a NATO mission. Pressure from the US to spend more on defense has split Germany's governing coalition.

The pledge is real. But is it realistic?

Nearly three years after it promised to meet a NATO guideline calling for billions more toward the nation's defense funding over the coming decade, the German government is sending mixed signals over whether the goal is feasible—or even necessary.

Opposition came this week not just from the foreign minister, whose coalition-member Social Democrats (SPD) will challenge German chancellor Angela Merkel in fall elections. It came from Merkel's own party, whose parliamentary budget expert called the idea "unreasonable."

The debate reflects how a symbol of transatlantic cooperation—an expectation that member states spend two percent of their gross domestic product (GDP) on defense—has turned into a political tool on both sides of the Atlantic, and one that says little about military capabilities.

"Because it's a very handy metric, it can be politicized easily," Jan Techau of the American Academy in Berlin told DW.

The two-percent metric was first used in 2002 as a way for U.S. administrations to encourage European nations to begin reinvesting in defense budgets that had been gutted after the Cold War. It was also helpful for proving to Americans back home that an alliance largely funded with U.S. dollars was measuring Europe's contribution.

The biggest criticism is that such a formula can't measure effectiveness of spending. Nations can meet the obligation but still spend on inflated pensions, bad contracts or outdated capabilities. The four European militaries that met the metric in 2016 were Greece, the UK, Estonia and Poland—countries with vastly different military capabilities.

Yet the guideline was still taken seriously in Europe, where nations saw a massive gap between American expectations and realities, Techau said.

Germany faced particular challenges. The country's post-Cold War economy grew rapidly as its military defense budget shrank through disarmament and a reluctance to spend on defense.

The result is a more expensive path to two percent. With a 2017 defense budget of 37 billion euros, Germany has the third highest budget of European members of NATO, yet it only spends 1.2 percent of its GDP. Reaching two percent would require about 25 billion more euros, or a 60 percent increase in the defense budget.

"If the German economy would slow down significantly, that would be the easiest way to reach the two-percent goal," Thomas Wiegold, who runs a blog focused on the German military, or Bundeswehr, told DW. "But that wouldn't help anyone."

Germany nonetheless pledged in 2014 to reach the two-percent mark by 2024, part of a NATO-wide declaration at a summit in Wales. Russia's recent annexation of Crimea had given new life to the alliance, as eastern members feared their resurgent neighbor.

New pressure from US

The pledge isn't legally binding, but pressure from the new U.S. administration suggests it might be viewed as more than a recommendation. American secretary of defense, James Mattis, told NATO defense ministers last week that the U.S. would "moderate" its commitment to the alliance unless it saw a clear intent to spend by year's end. 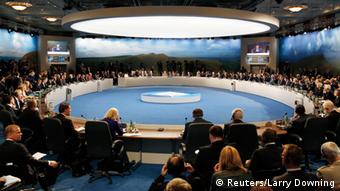 Germany pledged to meet NATO's two-percent defense spending guideline at the alliance summit in Wales in 2014. The non-binding agreement calls for members to reach a level of defense spending equivalent to two percent of gross domestic product, or GDP, by 2024.

His meaning remains unclear, but Techau and Wiegold say some in the alliance fear the Trump administration may use the two-percent pledge against them, citing it as reason to pull back resources.

The new pressure sent ripples through Germany's government. After foreign minister Sigmar Gabriel criticized the two-percent goal as "unrealistic" and wondered aloud where the money would be found, defense minister Ursula von der Leyen accused him of playing politics with an issue his party had supported in 2014.

"Whether it would really set our neighbors at ease if we spend two percent a year—that is, over 60 billion euros—in armaments, I have my doubts,” he said during a Wednesday press conference.

Yet the CDU has offered no clear plan to reach the two-percent goal by 2024, leaving observers like Techau and Wiegold to conclude Merkel's own party doesn't see the pledge as realistic.

Eckhardt Rehberg, the budget expert for the CDU parliament faction, said as much on Wednesday, when he told a German public radio program that such a massive spending increase was difficult to imagine.

"That is, first of all, not workable in the federal budget,” Rehberg told MDR. "Second, it's unreasonable, because we have neither the personnel numbers nor the structure in the Bundeswehr.”

A column in the German newspaper Süddeutsche Zeitung made a similar argument last week, noting that even if it bought an aircraft carrier with its bigger budget, the Bundeswehr lacks the manpower to operate it, the dedicated ships to protect it and aircraft designed to land on it.

Wiegold agreed that incremental increases to the defense budget and gradual improvements to equipment and personnel deficits are more helpful than a windfall of funding.

"I think everybody in the government agrees the Bundeswehr needs more money," he said. "On the other hand there's a certain amount of money the Bundeswehr can absorb."

Techau says any concerns over a mythical windfall are misplaced in the first place.

"It kind of distracts from the real argument, which is that Germany needs to be willing to do more, and it needs to spend on capabilities that are actually useful in the end," he said.