Germany has become the most popular country in the world for foreign students in the non-English-speaking world. A new study released by two academic services found that students were attracted by better prospects. 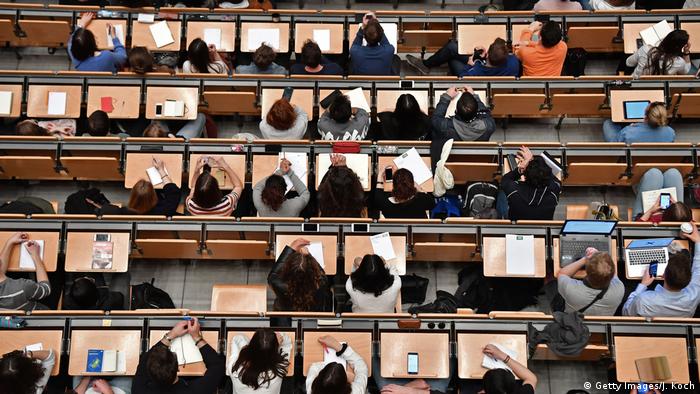 Germany has overtaken France as the most popular non-English-speaking country for international students, according to a new study. Germany came in behind the US, Britain and Australia in the rankings in 2016 (the most recent year for which data was available).

The figures were published in a study compiled for the German Academic Exchange Service (DAAD) and the German Center for Higher Education Research and Science Studies (DZHW).

Some 83% of the students surveyed said that they had chosen Germany because it offered them good professional opportunities, while 74% said they had come for an internationally recognized qualification.

More than 80% added that Germany had been recommended to them by friends and acquaintances.

Julia Hillmann of the DAAD put her finger on one of the biggest draws for international students: the fact that most German states don't have tuition fees. "Of course it's undeniable that that's an important point in Germany," she told DW. "Of course in comparison to a lot of countries that are well-loved target countries but have very high fees, a decisive factor for many."

The report was also welcomed by German Education Minister Anja Karliczek. "Our university and research location is becoming more and more attractive internationally," she said in a statement. "We can be proud of that and it should spur us on to be even better."

Indeed, Hillmann confirmed that there was room for improvement, and that universities were working to address the concerns of international students.

"Dropping out is an issue for foreign students," she said, pointing out that 45% of foreign students drop out in Germany, a much higher rate than the 28% among German students. "One would assume that language problems and other elements of the educational culture in Germany play a role, but also financial problems."

She went on to suggest that the 42,000 foreign students who graduated in Germany last year "form a significant and growing potential for covering our skilled labor needs."

The report also found that some 24,000 international students were of the eight nationalities that file the most asylum applications in Germany: Syria, Afghanistan, Iran, Iraq, Nigeria, Eritrea, Pakistan and Somalia. "Syrian refugees currently form the sixth-highest foreign country of origin at German universities," the DZHW study said.

The trend also appears to be continuing, with some 282,000 international students registering for the 2017/2018 winter semester.

"The number of foreign academics at German universities has almost doubled in the last 10 years," DZHW academic director Monika Jungbauer-Gans said in a statement.

The exchange also goes both ways: around a third of German students spend at least some of their study time abroad.

The Institute for Employment Research has revealed that approximately 400,000 refugees will be in work before the end of the year. The agency is "quite satifsifed" with migrants' assimilation into the labor market. (06.08.2019)

Germany has set up a special degree program to build up its national intelligence community. But it's only open to a select few — thoroughly vetted — students. (13.07.2019)

The German teacher who travelled the world for a year to learn about the countries his foreign students come from.