A group of migrants have pelted officers with stones as they tried to investigate the death of a woman at the migrant center in the southern German city of Regensburg. A three-hour operation ensued to remove her body. 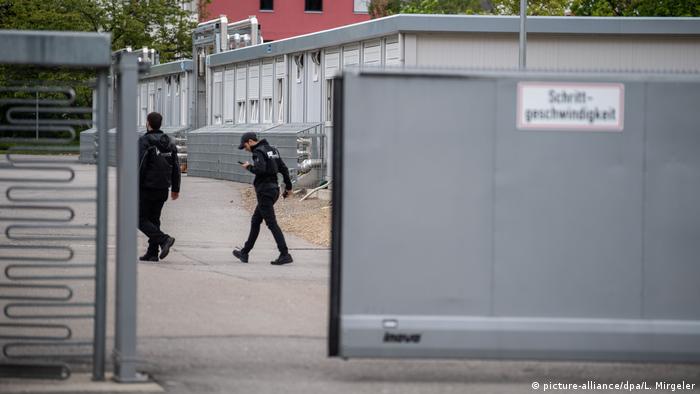 Clashes broke out between police and migrants at an asylum-seeker processing center in southern Germany on Saturday following the death of a woman.

Police said they were attacked and harassed by residents of the facility after they arrived to investigate the 31-year-old Nigerian's death.

The incident took place at around 9 a.m. local time (0800 UTC) in the city of Regensburg, around 100 kilometers (62 miles) northeast of Munich.

Officers described an atmosphere of high emotion inside the facility as 40-50 asylum-seekers prevented them from recovering the woman's body.

At one stage police were pelted with stones and other objects, a police spokesman said.

A large-scale police operation was launched involving 20 patrol cars and 50 police officers, but no one was arrested.

The woman's body was only recovered around noon and taken to a funeral home.

For tactical reasons, the migrants were allowed to carry the woman's coffin from the facility to an awaiting vehicle, the police statement said.

An investigation has been launched into her death. Police said there was no initial evidence that she had been attacked.

A separate probe is underway into the violence.

The woman leaves behind three children, aged nine, five and three, who are now in the care of social services.

The facility in question is a so-called anchor center, which in German is an acronym standing for arrival, distribution, decision and repatriation.

The institutions were set up to speed up the processing of asylum applications. Migrants are accommodated in the often crowded centers for the entirety of their asylum case.

Germany is increasingly making use of humanitarian admissions programs as part of its refugee policy, meaning orderly entry for migrants rather than high-risk journeys. But resettlement is tied to three conditions. (28.04.2019)