Boris Romanchenko, 96, had been active in keeping alive the memory of Nazi atrocities. German lawmakers said his death "shows the criminal character" of Russia's invasion of Ukraine. 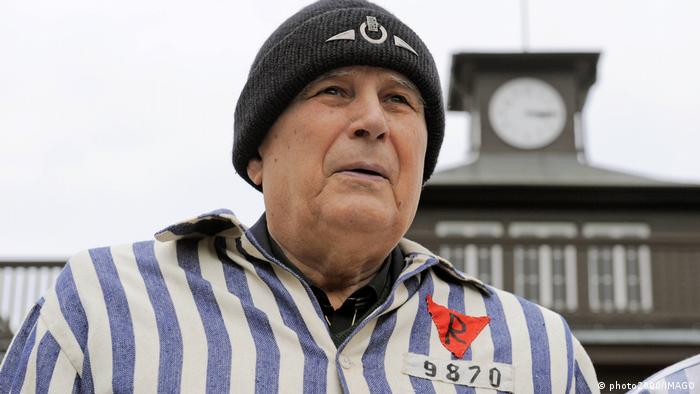 Romanschenko visited Buchenwald in 2011 to do a memorial reading

Germany's parliament, the Bundestag, paid tribute to Holocaust survivor Boris Romanchenko on Tuesday, several days after he was killed by a Russian attack on his home city of Kharkiv, Ukraine.

"His death reminds us that Germany has a special historical responsibility toward Ukraine,'' deputy speaker Katrin Goering-Eckardt said.

"Boris Romanchenko is one of thousands of dead in Ukraine," she added. "Every single life that has been taken reminds us to do everything we can to stop this cruel war that violates international law and to help people in and from Ukraine.''

Finance Minister Christian Linder said the fate of Romanchenko, 96, "shows both the criminal character of Russian policy and why Germany is showing solidarity with Ukraine.''

Born in 1926 in a village outside of Sumy, Ukraine, he was taken prisoner by the Nazis in 1941, when the German army launched its offensive against the Soviet Union.

He was deported to Dortmund for forced labor, and survived stints at the Buchenwald, Peenemünde, Mittelbau-Dora and Bergen-Belsen concentration camps. He said he was liberated by British and American forces in 1945 shortly before his captors were able to carry out a plan to poison many of the remaining prisoners.

After the war, he dedicated himself to keeping alive the memory of Nazi atrocities, playing an active role in institutions such as the Buchenwald and Mittelbau-Dora Memorials Foundation.

On its website, the foundation wrote: "We mourn for our dear friend. To his son and his granddaughter, who told us of the sad news, we wish them strength in these difficult times."

Romanchenko reportedly passed away on Friday, when a Russian bomb hit the building he was living in.