The European economy received some good news Monday with new forecasts predicting it would grow twice as fast as expected this year. Behind the new figures is continued growth in Germany. 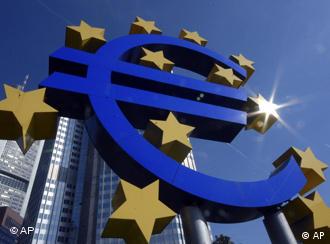 The 27-nation EU was hit hard by the financial crisis

Confidence in the European economy received a shot in the arm Monday with renewed growth estimates showing the euro zone economy is likely to grow twice as fast as previously thought.

The European Commission said in its biannual interim economics forecast for the EU that the 16-member euro zone would grow by around 1.7 percent this year, up from the 0.9 percent growth forecast made in May.

At the heart of the new figures has been snowballing financial confidence in Germany, Europe's largest economy.

The commission almost tripled its forecast for German gross domestic product growth to 3.4 percent from 1.2 percent for 2010. It also raised predictions for France, Italy and the Netherlands.

The commission figures roughly match up with those of the European Central Bank, which said on September 2 it expected euro zone growth to be between 1.4 and 1.7 percent in 2010.

Economic and Monetary Affairs Commissioner Olli Rehn said in a statement that "the rebound of domestic demand bodes well for the job market."

"The contribution of private investment and consumption to GDP growth in the second quarter of 2010 exceeded the combined contributions of inventories and net exports," the commission said in a statement.

The Great Unwind in the global financial sector has led to the Great Reset. New banking rules aim to strengthen bank finances and reign in excessive risk-taking. But could they also slow economic recovery? (13.09.2010)

US economist Robert Shapiro talks to Deutsche Welle about concerns over Europe's debt crisis and other economic challenges facing the US and the EU. (21.05.2010)