Germany's Defense Ministry has announced it will freeze deliveries of its combat aircraft after discovering a technical problem. It's not the first time the fleet has been plagued with delays. 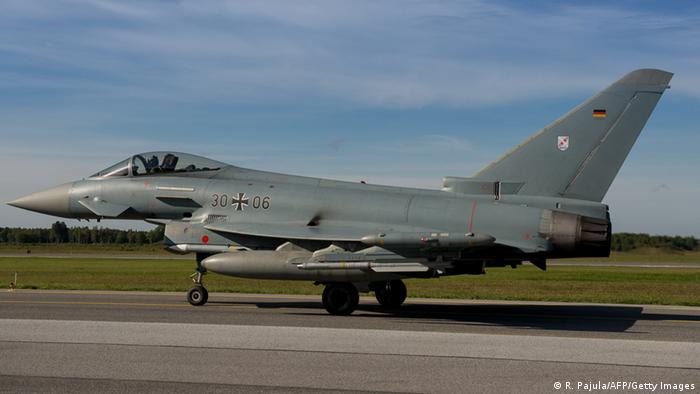 Germany announced on Tuesday it would halt deliveries of the Eurofighter Typhoon after identifying a technical defect. Airbus, manufacturer of the combat aircraft, said the flaw does not impact the jet's overall performance.

"This incident does not affect flight safety or operational ability of the Eurofighters. The lifespan of the jets isn't affected either," an Airbus spokesperson said, according to German news agency dpa.

The flaw reportedly had to do with the way holes were drilled into the aircraft's fuselage. A similar problem forced the Bundeswehr to freeze deliveries of the jets in the past.

The Eurofighter Typhoon is the product of a partnership between various European aerospace companies: Britain's BAE Systems, Italy's Finmeccanica and the multinational corporation Airbus. It entered into service in 2003 and saw its first combat mission in Libya in 2011.

The discovery of the aircraft's latest flaw comes about a year after Germany's defense ministry faced questions regarding the apparently poor state of its military equipment.

Germany currently has 110 Eurofighters, and is expecting 33 more.

The Gulf state of Kuwait has followed Oman and Saudi Arabia in buying Eurofighter Typhoon combat aircraft. The multi-billion-euro deal will upgrade Kuwait's air force against the backdrop of increased regional tensions. (12.09.2015)

Germany's Defense Ministry miscalculated its planned outlay for two of Europe's new weapon systems to the extent of 1 billion euros, according to "Der Spiegel" magazine. The ministry denies that errors occurred. (25.07.2015)

A consultants' report commissioned by Germany's defense ministry has confirmed a series of delays and deficiencies in equipping German armed forces. The experts blame the problem on faulty project management. (06.10.2014)