Germany: Cologne's mosques to play call to prayer on Fridays 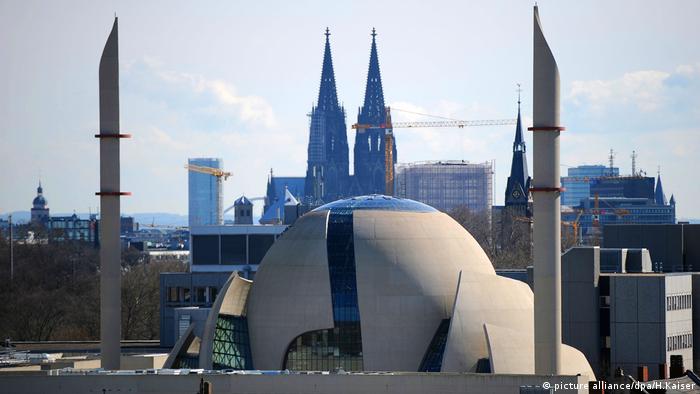 Cologne's Central Mosque is the largest in Germany

The Central Mosque of Cologne will be permitted to broadcast its call to prayer over loudspeakers on Friday afternoons, officials said on Monday.

All 35 mosques in the western German city will now be able to play the call for up to five minutes on Fridays between noon and 3 p.m. local time.

The two-year initiative, which is subject to renewal, comes as part of an agreement between the city of Cologne and the Muslim community to ease restrictions.

Mosques seeking to broadcast the call will have to comply with limits on the volume of their loudspeakers and notify neighbors in advance, the city said.

Cologne's Central Mosque , the largest in Germany, has been a flashpoint for anti-Muslim sentiment from far-right parties.

Having been partly financed by donations from the Turkish government's religious affairs authority in Germany, DITIB, the mosque has also been a major source of debate since its construction. Turkish President Recep Tayyip Erdogan even formally inaugurated the Mosque himself during a controversial visit to Germany in September 2018.

While the decision to allow the call to prayer was welcomed by the city's Muslim community, it drew criticism on social media. Over the weekend, the Mayor Henriette Reker defended the move.

"There has been much discussion over the project #Muezzin-Ruf (Muslim call). Cologne is the city of [religious] freedom and diversity," said Reker on Twitter.

"Those who arrive at the main train station are greeted by the cathedral and accompanied by church bells. Many Cologne residents are Muslims. Allowing the muezzin call is for me a sign of respect," she added.