Days after schools in one German state re-opened their doors, hundreds of students have been sent home once again. Isolated COVID-19 cases are to blame. 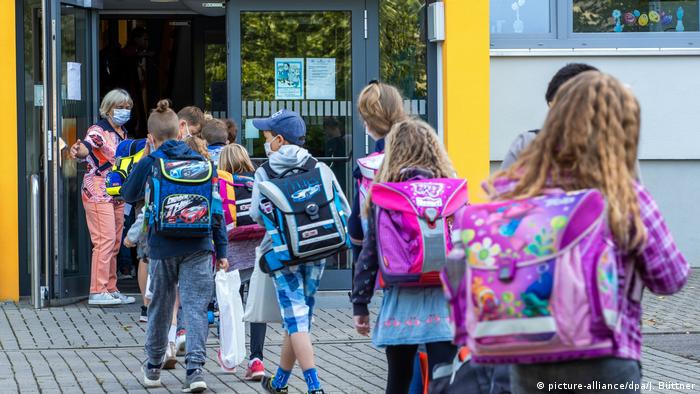 Hundreds of students were sent home from school on Friday in Germany because of fresh coronavirus infections, mere days after they reopened.

The state of Mecklenburg-Western Pomerania became the first in Germany to reopen school full time when children returned to classes after the summer holiday at the beginning of this week. However, almost 1,000 students were sent home from a high school in Ludwigslust Friday morning after a teacher tested positive for COVID-19. Although the teacher had not yet given a class since the school students returned, all members of staff will now undergo testing.

Separately, an elementary school near Rostock also closed for two weeks beginning on Monday after one student tested positive. Because of the short notice in the closure, classes on Friday went ahead — but took place outside.

Read more: Schools in Germany reopen — but coronavirus is not gone

Questions asked for the rest of Germany

The fresh cases come as a blow to those who hoped that the eastern state would show that opening schools was a safe and sensible decision.

"From the very beginning, we said that there would be suspected cases in the schools — as long as the coronavirus is not defeated and we don’t have a vaccine, then we have to work on that assumption," said the Mecklenburg-Western Pomerania's Education Minister Bettina Martin in Schwerin.

All of Germany's 16 states agreed in July to return schools to normal once summer holidays were over — but these closures may cause some local authorities to think twice.

Children in the capital of Berlin and the most-populous state of North-Rhine Westphalia are poised to return to school next week. Daily nationwide positive tests exceeded 1,000 for the second day in a row on Friday for the first time in three months.

Children return to schools in Germany amid coronavirus fears