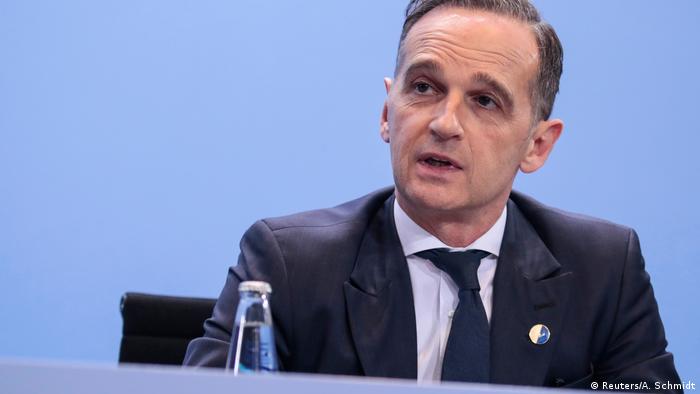 The question how to maintain a fragile ceasefire in Libya took up much of Monday morning when German Foreign Minister Heiko Maas met EU High Representative Josep Borrell in Berlin.

"No one thought there would be a quick solution," Maas told reporters in the ensuing press conference, after reports emerged over the weekend that the embargo agreed during the Berlin conference earlier in January was already failing.

The UN Security Council should agree that "this would not remain without consequences," Maas said. "All of us who sat at the table in Berlin and agreed the conclusions will take responsibility for that."

Representatives of some 16 nations and international organizations at the Berlin Libya summit agreed to stop delivering weapons into Libya, where the Tripoli-based government and the rival Tobruk government are locked in a drawn out conflict. The US and the EU, as well as Turkey, support the Tripoli government, while Russia backs the opposing warlord Khalifa Haftar.

The ongoing instability has exacerbated the migration crisis, and the 72-year-old Spanish diplomat Borrell, not afraid of an undiplomatic turn of phrase, told the Süddeutsche Zeitung on Sunday, "Libya is a cancer whose metastases are spreading into the whole region."

Maas is hoping that the 5+5 committee, with representatives from the Libyan conflict parties, will meet this week to discuss the possibility of a UN-brokered truce.

Read more: Who will monitor a Libya ceasefire?

Borrell had claimed that the deal had been a success for the EU, which is seeking to play a bigger role on the international stage. This would mean that Borrell's office, officially entitled High Representative of the European Union, has taken on new significance.

According to Borrell, one of the keys to the EU's reassertion could be to reactivate Operation Sophia, a naval mission in the Mediterranean Sea designed to counter refugee and oil smuggling from North Africa.

The mission was stopped in March last year following pressure from Italy, where the operation was headquartered. The government in Rome was unhappy that the naval ships were rescuing refugees and bringing them to Italy where they made asylum applications.

According to Borrell, the withdrawal was a mistake, as it allowed Russia and Turkey to gain influence in Libya, and he has expressed his hope that Operation Sophia could be re-activated in February.

The sticking point, as for so long in the EU, remains how shipwrecked migrants should be distributed among member states.

The German government has invited the warring parties in the North African country and their foreign supporters to the chancellery in Berlin. The hope for on Sunday's talks is to achieve stability for the whole region. (19.01.2020)

Germany calls for removal of foreign fighters from Libya 23.06.2021

UN General Assembly: Germany struggles to define its place in the world 24.09.2021