Three goals in the first half hour helped Germany to a win in Portugal that takes them a step closer to the Women's World Cup. It may not have been as emphatic as recent victories but Germany have now won six in a row. 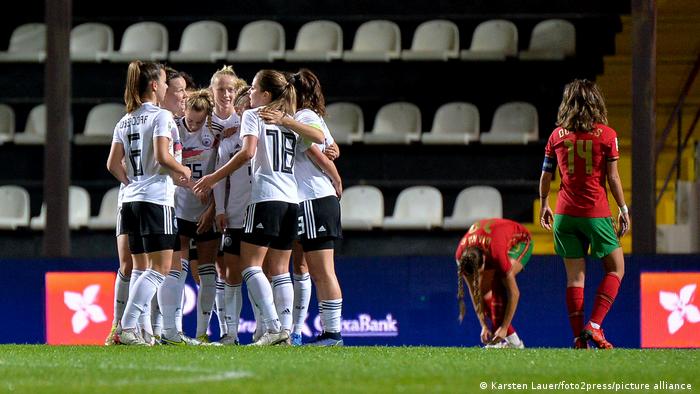 It looked their toughest qualifying assignment so far. But Martina Voss Tecklenburg's team took control early in Faro, before keeping Portugal at arm's length in a straightforward win that lifts them five points above their opponents.

The confidence gained in 8-0 and 7-0 wins in their previous two qualifiers, against Turkey and Israel, was apparent early on in Germany's play. That was particularly true of Lea Schüller, who added to her hat-trick in the Turkey game with an early headed goal on Tuesday. The Bayern Munich forward now has 11 in 11 for Germany in 2021 and is fast becoming a key attacking figure.

The next woman on the scoresheet, Svenja Huth, has been that for some time. The 30-year-old doubled the lead shortly after the deadlock had been broken with a right-footed drive, before Melanie Leupolz added a deflected third as Germany looked increasingly capable of another big win.

Back off the woodwork

But they were halted in their tracks when Portugal were awarded a penalty soon after, only for Carol Costa's spot kick to strike the post. Nevertheless, the home side managed to breach the German defense for just the second time in their qualifying campaign before registering a shot on target, after the ball then hit Merle Frohms' back and bounced back in to her own net. In truth, it already seemed as if it would be a matter of regret only for the goalkeeper herself.

Though they continued to offer little in an attacking sense, Portugal grew in to the game a little as it went on, but the second half soon descended in to a series of substitutions and bookings with little flow.

"We started very well, then conceded an unnecessary goal. Then the second half was a bit disjointed," said Leupolz after winning her 75th cap. "But at the end of the day we're happy with the three points, we'll take that into the new year."

It was certainly not the kind of fluid attacking display Germany have served up of late, but with four games to go in qualifying, their progress to Australia/New Zealand 2023 looks assured even before next year's European Championships.

Voss-Tecklenburg described the win as "a cool end to the year" but the Germany coach will know that the two years that follow will define her tenure more than 2021.